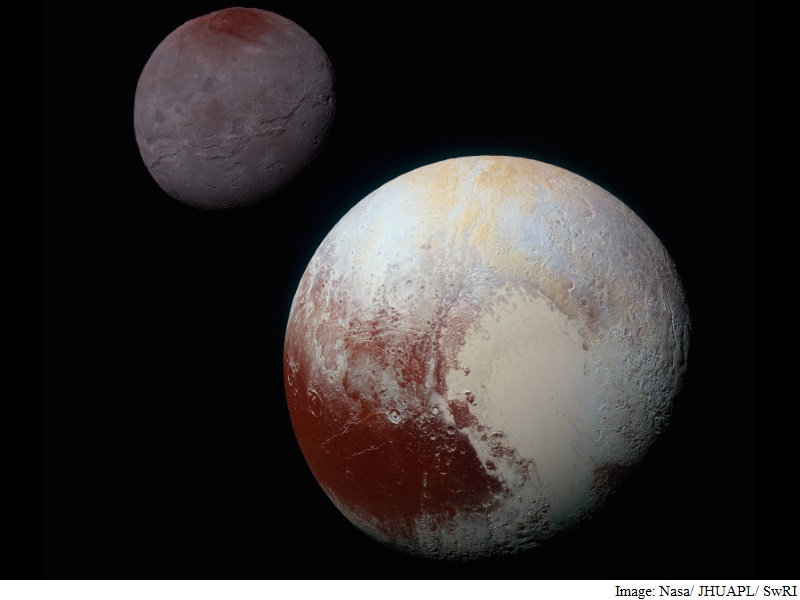 "These five detailed papers completely transform our view of Pluto - revealing the former 'astronomer's planet' to be a real world with diverse and active geology, exotic surface chemistry, a complex atmosphere, puzzling interaction with the Sun and an intriguing system of small moons," said New Horizons principal investigator Alan Stern.

After a 9.5-year, three-billion-mile journey - launching faster and traveling farther than any spacecraft to reach its primary target - New Horizons zipped by Pluto on July 14, 2015.

New Horizons' seven science instruments collected about 50 gigabits of data on the spacecraft's digital recorders, most of it coming over nine busy days surrounding the encounter, Nasa said in a statement.

The first close-up pictures revealed a large heart-shaped feature carved into Pluto's surface, telling scientists that this "new" type of planetary world - the largest, brightest and first-explored in the mysterious, distant "third zone" of our solar system known as the Kuiper Belt - would be even more interesting and puzzling than models predicted.

"Observing Pluto and Charon up close has caused us to completely reassess thinking on what sort of geological activity can be sustained on isolated planetary bodies in this distant region of the solar system, worlds that formerly had been thought to be relics little changed since the Kuiper Belt's formation," said Jeff Moore, lead author of the geology paper.

Scientists studying Pluto's composition say the diversity of its landscape stems from eons of interaction between highly volatile and mobile methane, nitrogen and carbon monoxide ices with inert and sturdy water ice.

"We see variations in the distribution of Pluto's volatile ices that point to fascinating cycles of evaporation and condensation," said Will Grundy of the Lowell Observatory, Flagstaff, Arizona, lead author of the composition paper.

"These cycles are a lot richer than those on Earth, where there's really only one material that condenses and evaporates -- water. On Pluto, there are at least three materials, and while they interact in ways we don't yet fully understand, we definitely see their effects all across Pluto's surface."

Above the surface, scientists discovered Pluto's atmosphere contains layered hazes, and is both cooler and more compact than expected. This affects how Pluto's upper atmosphere is lost to space, and how it interacts with the stream of charged particles from the Sun known as the solar wind.

They have found evidence that some of the moons resulted from mergers of even smaller bodies, and that their surface ages date back at least four billion years.

About half of New Horizons' flyby data has now been transmitted home -- from distances where radio signals at light speed need nearly five hours to reach Earth - with all of it expected back by the end of 2016.

Apple vs the FBI: How the Case Could Play Out
Foxconn Lowering Offer for Japan's Sharp: Report