Perseverance is scheduled to liftoff for Mars at 11:50am GMT (5:20pm IST) from Cape Canaveral, Florida, US. 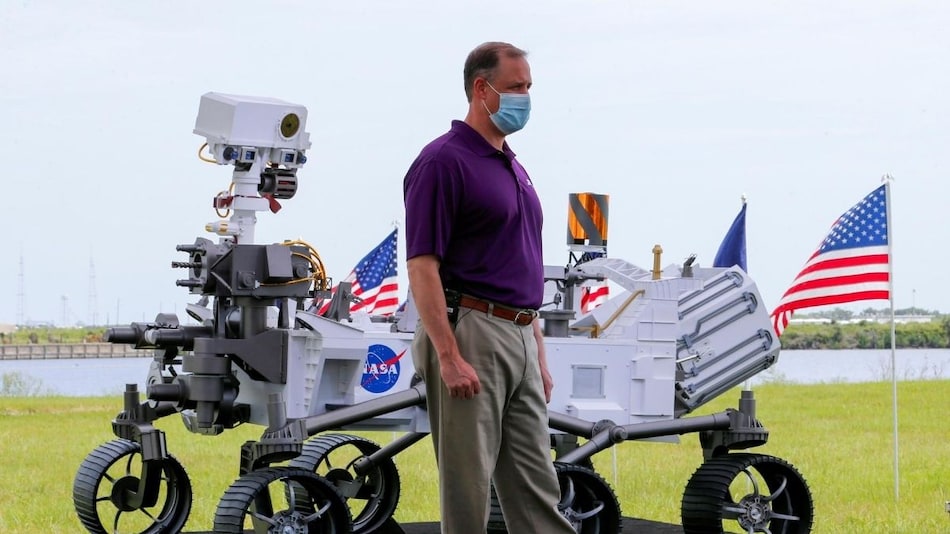 NASA's latest Mars rover Perseverance launches Thursday on an astrobiology mission to look for signs of ancient microbial life -- and to fly a helicopter-drone on another world for the first time.

Take-off is scheduled for 7:50 am (5:20 pm IST) from Cape Canaveral, Florida on board a United Launch Alliance Atlas V rocket.

If all goes to plan, Perseverance will reach the Red Planet on February 18, 2021, becoming the fifth rover to complete the voyage since 1997.

All so far have been American. China launched its first Mars rover last week, which should arrive by May 2021.

By next year, Mars could therefore have three active rovers, including NASA's Curiosity, which has traversed 23 kilometers (14 miles) of the Red Planet since it landed in 2012.

"It's without question, a challenge. There's no other way to put it," NASA chief Jim Bridenstine said Wednesday ahead of the launch.

"That being said, we know how to land on Mars, we've done it eight times already. This will be the ninth," he added, referring to the total of previous rover and lander missions.

Perseverance, which was developed at the storied Jet Propulsion Laboratory in Pasadena, California, is an improved version of Curiosity.

It is faster, with a tougher set of six wheels, has more computing power, and can autonomously navigate 200 meters per day.

About the size of a small SUV, it weighs a metric ton, has 19 cameras, and two microphones -- which scientists hope will be the first to record sound on Mars.

It has a two-meter-long robotic arm, and is powered by a small nuclear generator.

Once on the surface, NASA will deploy the Ingenuity Mars Helicopter -- a 1.8 kilogram (four pound) aircraft that will attempt to fly in an atmosphere that is only one percent the density of Earth's.

The idea is to lay down a proof of concept that could one day revolutionise planetary exploration, since rovers can only cover a few dozen kilometers in their whole lifespans and are vulnerable to sand dunes and other obstacles higher than 40 centimeters (15 inches).

Perseverance's primary mission is to scour the planet for evidence of ancient life forms.

Scientists believe that more than three billion years ago the planet was much warmer than today and was covered in rivers and lakes, conditions which could have led to simple microbial life.

The reasons for it becoming the cold, barren world we know today aren't fully known.

Another first: Perseverance's drill will collect around 30 intact rock cores and place them in test tubes, to be collected by a future joint US-European mission.

Indisputable proof of past life on Mars will most likely not be confirmed, if it exists, until these samples are analyzed next decade, NASA chief scientist Thomas Zurbuchen said on Tuesday.

"What we are looking for is likely very primitive life, we are not looking for advanced life forms that might be things like bones or fern fossils," explained project scientist Ken Farley.

NASA has chosen the Jezero crater as its landing site, a giant impact basin just north of the Martian equator.

Between three and four billion years ago, a river flowed there into a large body of water.

Scientists believe the ancient river delta could have collected and preserved organic molecules and other potential signs of microbial life.

If conditions are harsh on the sand-swept planet where night temperatures dip to minus 90 degrees Celsius (minus 130 Fahrenheit), it does have one major advantage: no plate tectonic activity. On Earth, it is extremely difficult to find landscapes that have remained the same for three billion years.

More than 350 geologists, geochemists, astrobiologists, atmospheric specialists and other scientists from around the world are taking part in the mission.

It is set to last at least two years, but probably much longer given the endurance shown by previous rovers.