The bigger galaxy is clearly visible like a giant spiral hanging against a black canvas, while the smaller one appears like an illuminated rock. 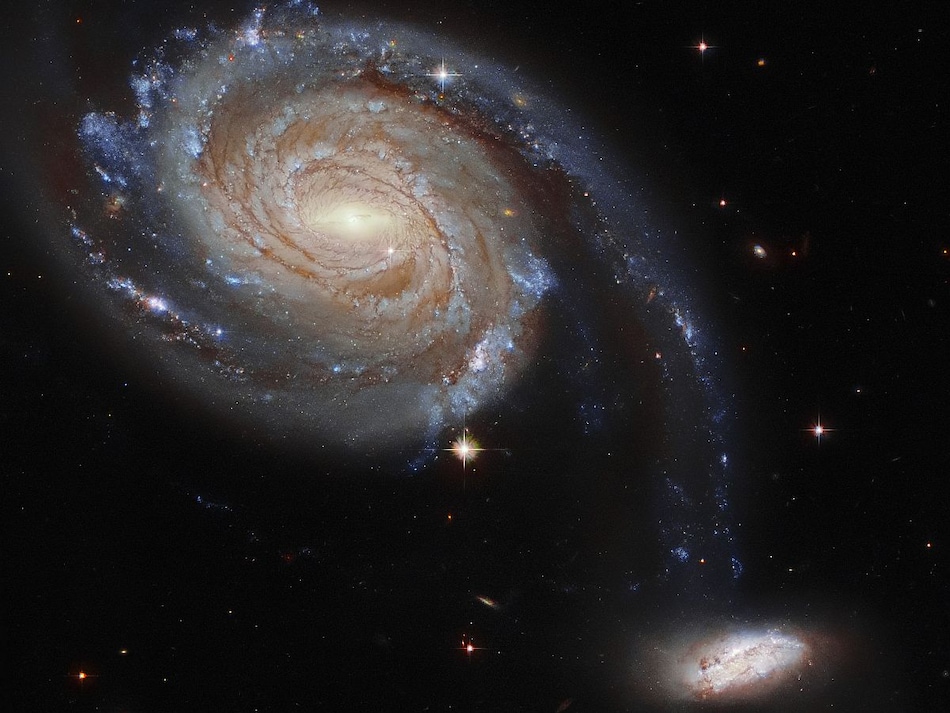 NASA has shared a dramatic image of two peculiar galaxies locked in a cosmic dance. The event was taking place at a distance of about 220 million light-years from Earth in the constellation Pegasus and was captured by the space agency's powerful Hubble Space Telescope. The image shows the diminutive galaxy almost attached to its much larger neighbour by a strand of light-emitting threads. NASA said the gravitational pull between the two galaxies will eventually result in the smaller galaxy either being tossed out into space or it will be consumed by the larger one.

The bigger galaxy, named NGC 7753, is clearly visible like a giant structure hanging against a black canvas, while the smaller NGC 7752 appears like an illuminated rock. Together, these galaxies are called “Arp 86”, signifying that they appear in the Atlas of Peculiar Galaxies compiled by the astronomer Halton Arp in 1966.

This #HubbleFriday image shows a pair of galaxies locked in a cosmic dance.

Eventually, the gravitational pull between them will result in the smaller galaxy being tossed out into space or engulfed by its larger neighbor.

NASA said in a statement that the Hubble found Arp 86 as part of a larger effort to understand the connections between young stars and the clouds of cold gas in which they form. For these observations, Hubble makes use of data provided by ALMA, a gigantic radio telescope perched high in the Chilean Andes. The space agency said these Hubble observations provide “a treasure trove of data” for astronomers trying to understand how stars are born.

Beautiful scene, the hubble is our eye to see the greatness of the universe

Once the James Webb Space Telescope, a joint project by the American and the European space agencies, is launched later this year, astronomers will have more detailed observational data sets to study star formation in dusty regions like those in the galaxies of Arp 86.

“Hubble has had an incredible run. Can't wait to see what JWST will show us!” said a user.

The Hubble Telescope was launched in 1990. It has since made more than 1.3 million observations. The JWST is set to be launched on December 18.