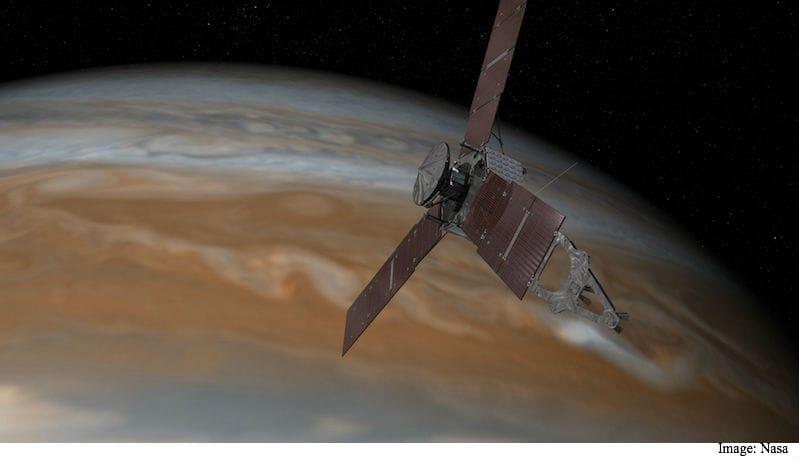 Mission managers for Juno probe to Jupiter have decided to delay the upcoming burn of its main rocket motor - designed to put the spacecraft closer to the largest planet in our solar system - until December, the US space agency said on Saturday.

The decision was made in order to further study the performance of a set of valves that are part of the spacecraft's fuel pressurisation system.

This burn, originally scheduled for October 19, called the period reduction manoeuvre (PRM), was to reduce Juno's orbital period around Jupiter from 53.4 to 14 days.

"It is important to note that the orbital period does not affect the quality of the science that takes place during one of Juno's close flybys of Jupiter," said Scott Bolton, principal investigator of Juno from the Southwest Research Institute in San Antonio.

"The mission is very flexible that way. The data we collected during our first flyby on August 27th was a revelation, and I fully anticipate a similar result from Juno's October 19th flyby," Bolton noted.

The most efficient time to perform such a burn is when the spacecraft is at the part of its orbit which is closest to the planet.

The next opportunity for the burn would be during its close flyby of Jupiter on December 11, Nasa said.

Mission designers had originally planned to limit the number of science instruments on during Juno's October 19 close flyby of Jupiter.

Now, with the period reduction manoeuvre postponed, all of the spacecraft's science instruments will be gathering data during the upcoming flyby.

The Juno spacecraft launched on August 5, 2011, from Cape Canaveral, Florida, and arrived at Jupiter on July 4, 2016.