In a video, NASA explained the working of DAVINCI — Deep Atmosphere Venus Investigation of Noble gases, Chemistry, and Imaging mission. 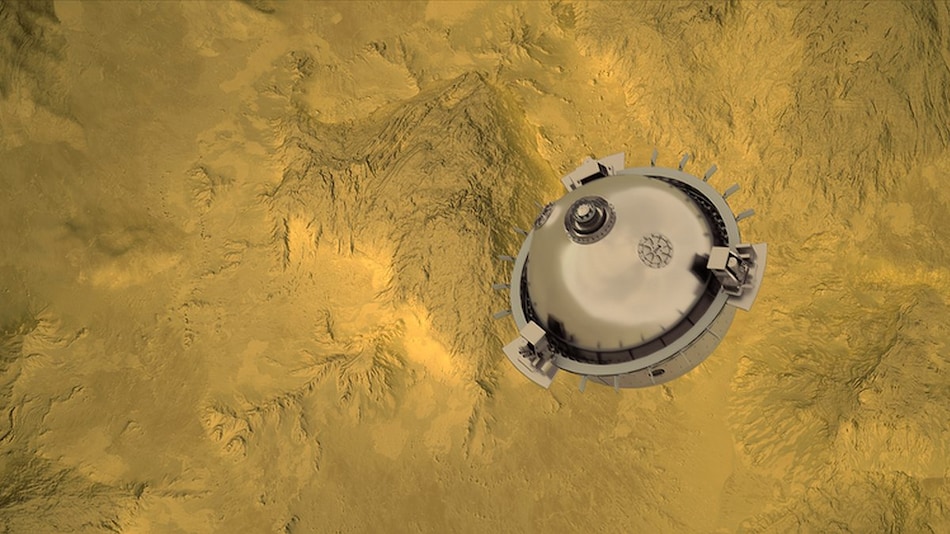 Earth and Venus are similar in size and location but that similarity likely ends there. While Earth has an abundance of water and life, Venus is dry and fiercely inhospitable. Being closer to the Sun makes it much hotter than Earth. Its atmosphere is mostly carbon dioxide, which makes the gas appear like liquid near the surface. NASA has planned to explore Venus via two missions in the early 2030s. One of them is VERITAS, which would orbit the planet. And the other, DAVINCI — Deep Atmosphere Venus Investigation of Noble gases, Chemistry, and Imaging — would launch a probe through the acrid Venus atmosphere to observe various parameters including whether it once had water.

In a new video, NASA explained how the DAVINCI mission will unfold and what it was likely to do once it reached Venus. Named after the Italian artist Leonardo da Vinci, it is set to launch in 2029. It will attempt to seek answers to fundamental questions about the origin, evolution, and composition of Venus.

The caption of the video posted on the official YouTube channel of NASA's Goddard Space Flight Center states that the DAVINCI mission will “bring a rich suite of instruments to Venus to address long-standing questions about Earth's sister planet”.

According to the video, the DAVINCI mission comprises two main parts — the main spacecraft and a probe that will descend through the Venus atmosphere, gathering data and making observations. The main spacecraft will conduct two flybys of the planet to study its atmosphere and the nightside surface. Seven months later, the probe will be released for a one-hour descent through the clouds, detecting composition, temperatures, pressures, and winds present at each layer of the Venusian atmosphere. All this data will be beamed back to Earth, where scientists hope to unlock the mysteries of the Earth's twin planet and see whether it once had water and whether it can be habitable one day.

“Venus is waiting for us all, and DAVINCI is ready to take us there and ignite a new Venus renaissance,” the narrator says in the video.

According to the caption, “Some scientists think Venus may once have been more Earth-like in the past, with oceans and pleasant surface temperatures. DAVINCI data will help us determine if this intriguing possibility is true.”

However, the caption added that now “Venus has a scorching surface hotter than your home oven, and a complex atmosphere 90 times thicker than Earth's made mostly of carbon dioxide and with sulfuric acid clouds”.

Towards the end of the video, the narrator says that discoveries from this data set will tell us whether Venus was truly habitable.

DAVINCI is a partnership between NASA's Goddard Space Flight Center and Lockheed Martin.