Morti, the robotic dog, is equipped with an artificial spinal cord that is continously optimised. 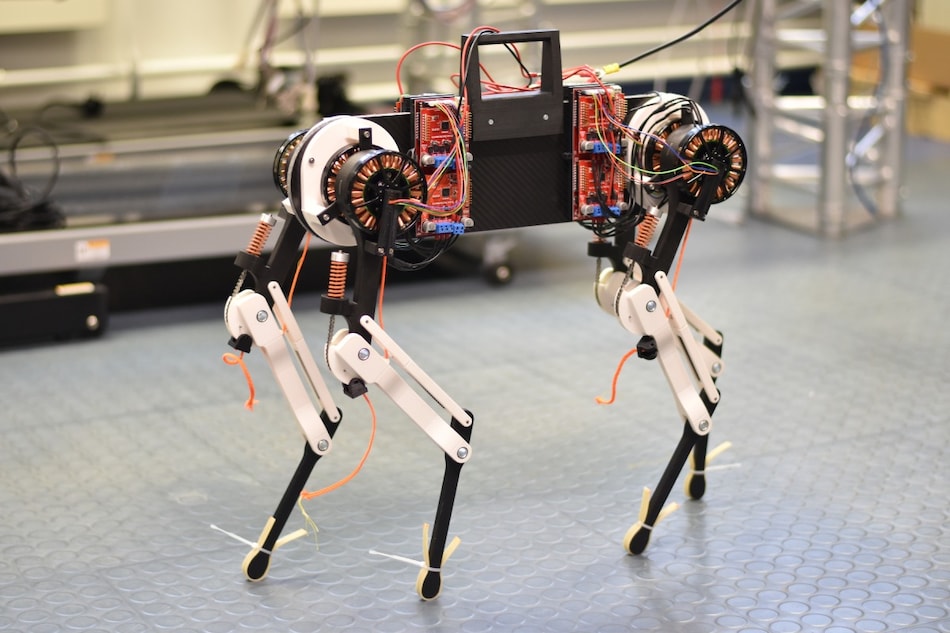 Researchers at the Max Planck Institute for Intelligent Systems (MPI-IS) in Germany have built a four-legged robot dog, which is capable of learning how to walk in an hour. The robot, Morti, is equipped with an artificial spinal cord that is continously optimised. The researchers were attempting to study how humans learn to walk from stumbling. When a baby of an animal is born, it has a muscle coordination network located in the spinal cord by birth but, it still takes time for the newborns to balance on their legs and learn to walk.

For the initial days after their birth, babies depend on the hard-wired spinal cords reflexes to learn walking. During the learning phase, the motor control reflexes save the baby from falling and sustaining injuries. The animal then must practice advanced and precise muscle control until the nervous system gets adapted to the animal's leg muscles and tendons.

To gain an understanding of this process, scientists made a four-legged robot of the size of a dog named Morti. “As engineers and roboticists, we sought the answer by building a robot that features reflexes just like an animal and learns from mistakes. If an animal stumbles, is that a mistake? Not if it happens once. But if it stumbles frequently, it gives us a measure of how well the robot walks,” said Felix Ruppert, a former doctoral student in the Dynamic Locomotion research group at MPI-IS and author of the study published in Nature Machine Intelligence.

The robot dog uses a Bayesian optimization algorithm to guide its learning. The information measured from the foot sensor is matched with the target data from the modelled virtual spinal cord, which is made to run as a program in the dog. The robot dog kept comparing the sent and expected sensor information, ran reflex loops and adapted its motor control patterns.

The learning algorithm adapts to the control parameters of a Central Pattern Generator (CPG). When an animal stumbles, its walk changes, and the reflexes are engaged to save the animals from falling. In Morti, the movement patterns are optimised faster than an animal. The dog has a virtual spinal cord attached to its back while the CPG is simulated on a computer.

When the robot is about to fall, the algorithm records data on the motion of the legs and adjusts the motion. The adjusted movement is then sent to the robot so that it stumbles less by optimising its walk.