MIT's Latest Dog-Like Robot Can Do Backflips on Command 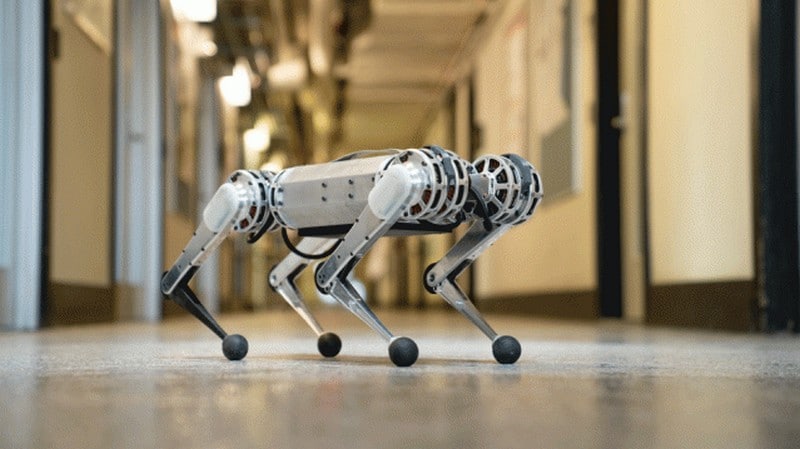 They can already open doors, traverse steep flights of stairs, run at high speed and unload your dishwasher.

Now, for the first time ever, a four-legged robot has performed a physical feat that evades all but the most athletic among us: a backflip.

The acrobatics arrive courtesy of Massachusetts Institute of Technology, where researchers have unveiled a springy, 20-pound robot that's also capable of walking either right-side up or upside down.

Reached by email, Benjamin Katz, a technical associate in MIT's Department of Mechanical Engineering who helped design the robot, wrote that the backflip isn't "inherently useful," but offers researchers a way to gauge the machine's capabilities.

"It's also a good stress-test of the hardware," he said. "It involves very high torque, power, and acceleration capability, and has a high-speed impact at the end, all of which are very harsh on the robot's mechanical components."

Mini Cheetah is powered by 12 electric motors that allow the machine to bend and swing its legs. Each of the robot's four legs is powered by three individual motors that engineers included to increase the machine's range of motion and help it change direction and make "high-force impacts" without breaking its limbs, researchers say. As a video released by MIT demonstrates, the robot was programmed to quickly recover from an unexpected force, such as a kick to the side.

Having a generous range of motion and being able to adapt to different surfaces will probably be critical components for four-legged robots that are deployed by humans at some point, researchers say.

"Legged robots will have a variety of uses where human or animallike mobility is necessary (climbing over stairs, rocks, etc.) but it may be unsafe to send a person: search and rescue, inspection, surveillance and so on," Katz wrote.

Mini Cheetah is not the first robot to execute a backflip. Atlas - the headless humanoid star of Boston Dynamics' viral robot videos - has not only been performing backflips, but doing so after a series of complicated box jumps that the machine surmounts with ease.

In recent years, the same company has produced a series of four-legged robots - with names like Spot, Wildcat and BigDog - that can open doors, carry heavy loads and run nearly 20 mph.

Last year, Boston Dynamics founder Marc Raibert told an audience in Germany that his team is testing the company's awkward, four-legged, doglike robot, SpotMini, for use in multiple industries, including security, delivery, construction and home assistance. The company says the 66-pound machine is 2 feet 9 inches tall and is the quietest of the company's robots. It runs on electricity, has 17 joints and can go for 90 minutes on a single charge.

MIT researchers have their own plans for their newest four-legged creation.

"Eventually, I'm hoping we could have a robotic dog race through an obstacle course, where each team controls a mini cheetah with different algorithms, and we can see which strategy is more effective," Sangbae Kim, associate professor of mechanical engineering told MIT News. "That's how you accelerate research."