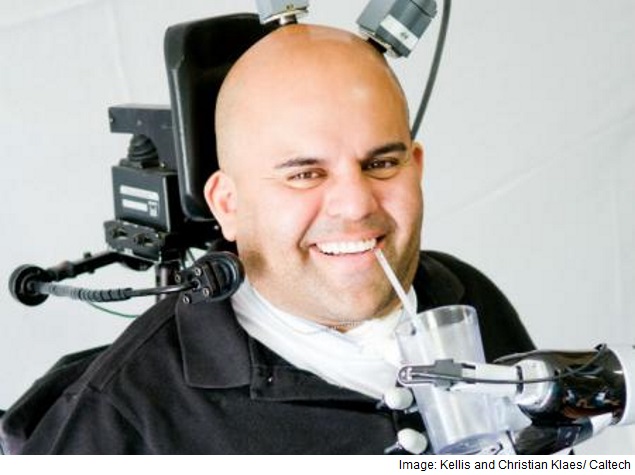 More than a decade after becoming paralysed from the neck down, Erik Sorto has been unable to perform even the simplest of daily tasks.

"That was the ultimate goal: to drink a beer by myself," said Sorto, a 34-year-old from Los Angeles who became a quadriplegic after a 2002 gunshot wound.

Things may be looking up for Sorto and others with similar disabilities. Scientists on Thursday described a better way to harness mind power to move prosthetic limbs.

Microelectrodes, implanted in the part of the brain that controls a person's intention to perform a movement, enabled a patient to fluidly guide a robotic arm, they said.

In a study published in the Science journal, surgeons at Keck Medicine of the University of Southern California placed a pair of small electrode arrays into Sorto's posterior parietal cortex, or PPC.

These neural prosthetics were then connected to computers that processed Sorto's brain signals and determined his intent, allowing him to control a robotic arm mounted to a table nearby, or a computer cursor.

"The PPC is a rich source of signals that can be used to determine the goals of a paralysed subject," said Andersen. "These signals can be used to control 'smart' robotics and computers that can work out the details of movement of external devices such as a robotic limb."

Neural prosthetic devices have previously been implanted in paralysed patients' motor cortex, the part of the brain that directly controls body movement. However, while those patients could control a robotic limb, movement was delayed and jerky.

Implanting the neuroprosthetics in the part of the brain that controls the intent to move yielded a more natural motion.

Sorto said he had a few tasks lined up.

And he was indeed able to drink his own beer.

"When I was able to do it with the robotic arm, it just reassured me that somehow in the future, people with my disability will be able to have some sort of independence," said Sorto. "And with that will come some sort of self-pride."