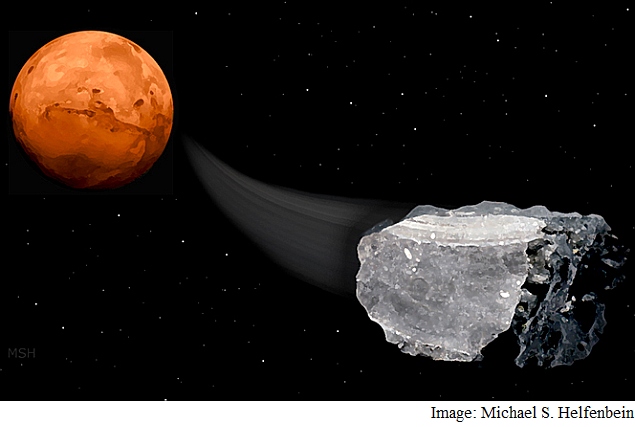 In a clue to possibility of life below the surface of Mars, an international team of researchers has discovered traces of methane in Martian meteorites.

For the study, the researchers examined samples from six meteorites of volcanic rock that originated on Mars. All six samples also contained methane, which was measured by crushing the rocks and running the emerging gas through a mass spectrometer.

The discovery hints at the possibility that methane could be used as a food source by rudimentary forms of life beneath the Martian surface. On Earth, microbes do this in a range of environments.

"Our findings will likely be used by astrobiologists in models and experiments aimed at understanding whether life could survive below the surface of Mars today," said study co-author Sean McMahon from Yale University in the US.

"Even if Martian methane does not directly feed microbes, it may signal the presence of a warm, wet, chemically reactive environment where life could thrive," McMahon said.

"One of the most exciting developments in the exploration of Mars has been the suggestion of methane in the Martian atmosphere," said University of Aberdeen professor John Parnell, who directed the research.

Recent and forthcoming missions by Nasa and the European Space Agency are looking at this. However, it is so far unclear where the methane comes from, and even whether it is really there, Parnell said.

"However, our research provides a strong indication that rocks on Mars contain a large reservoir of methane," Parnell pointed out.

The findings appeared in the journal Nature Communication
Comments

AMD Announces New GPUs Including Flagship Radeon R9 Fury With High-Bandwidth Memory
Have an Idea That's 'Made for India'? Intel and Government Will Pay You to Develop It