The image shows a distinctive 4km-wide crater located in the Vastitas Borealis region of Mars. 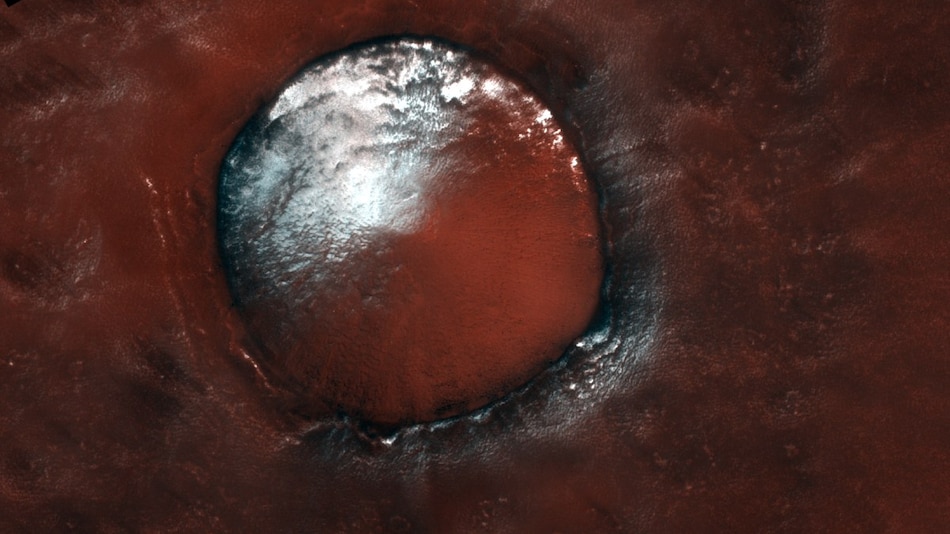 Mars has long been a sort of an enigma to astronomers. An image released recently by the European Space Agency (ESA) reinforces the mystery around the Red Planet. The image, captured by the Trace Gas Orbiter (TGO), showed Mars as a stunningly delightful cake. The ESA said the image made the Earth's neighbour appear "like a sprinkle of powdered sugar on a rich red velvet cake.”

But where does the white colour come from? ESA said it comes from water-ice and the red shades represent the rusty Martian soil. The image shows a distinctive 4km-wide crater located in the Vastitas Borealis region, a plains area near the planet's north pole. TGO, a joint mission by ESA and Russian space agency Roscosmos, captured the image in July last year.

“The crater is partially filled with water ice, which is also particularly predominant on its north-facing slopes that receive fewer hours of sunlight on average throughout the year,” ESA said. The darker area around the rim, which gives the crater a scorched appearance, likely comprises volcanic materials such as basalt.

The European and Russian space agencies sent the orbiter to Mars under the ExoMars programme, which will send a rover to the planet later this year. The TGO is studying atmospheric gases and looking for water resources on and near the Martian surface. Previously, it detected what scientists described as “hidden water” under the surface in a canyon on Mars.

The orbiter began exploring Mars in 2018, two years after reaching the Red Planet. The spacecraft is set to provide data relay services for the second ExoMars mission when it arrives on Mars in 2023.