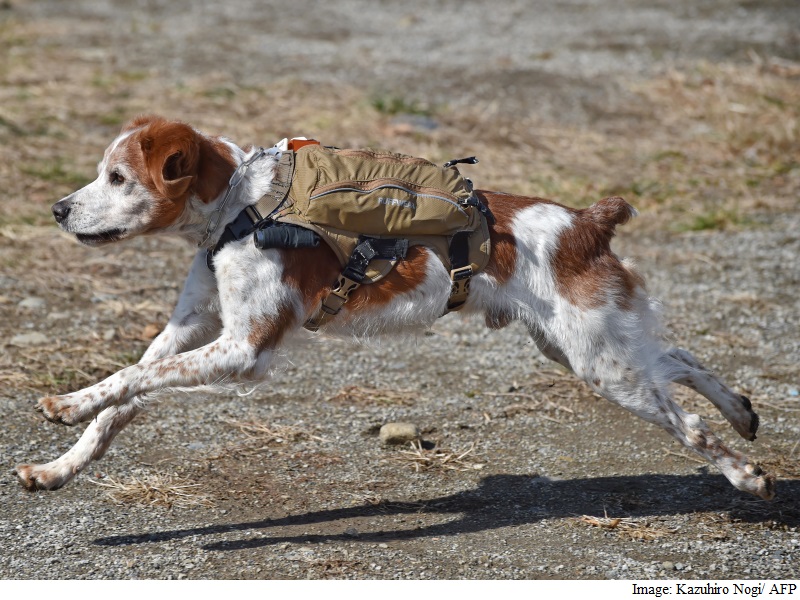 Rescue dog Gonta, outfitted with a GPS-enabled backpack but driven by his own innate sense of smell, jumps onto a pile of collapsed rubble to find buried survivors.

Though just a drill, the intensity of the Brittany spaniel in scouring the mound of broken concrete highlights the key role of sniffer dogs in saving lives when buildings collapse, such as in earthquakes or explosions.

Ten-year-old Gonta helped search for survivors after the massive 9.0 magnitude earthquake and tsunami on March 11, 2011 - back then he, like other rescue dogs, relied on their olfactory instincts to look for survivors.

But now a Japanese researcher says he has developed an idea that uses technology to augment nature - to increase the chance of finding people as the clock ticks down.

During the training session last month in the city of Fujimi north of Tokyo, Kazunori Ohno monitored live video and a map transmitted by the camera and GPS on Gonta to a tablet device.

Ohno, a professor at Japan's Tohoku University, said a big problem has been that a handler could not know what was happening once a dog entered a damaged structure alone.

The pack, still in development, helps overcome that hurdle.

"A handler can check a video to see where a dog is searching, how it looks inside a building and where survivors are located," he said.

The device strapped to Gonta's back weighs 1.3 kilogrammes (2.9 pounds) while the tiny camera attached to one side of it is just 100 grams.

Similar technologies have been developed in the US for military dogs, but Ohno said his device is unique as it can send live video from a dog's perspective to multiple tablets at once.

Unlike a heavy device used for large military dogs in the US, the outfit Ohno developed can be used for medium-sized dogs, like Gonta who weighs 14 kilogrammes.

Such animals are considered ideal for rescue work as they can cover treacherous terrain with greater ease than bigger dogs.

Gonta, with his coat of fluffy brown and white fur is usually playful and enthusiastic, but quickly turns serious when he gets the command to begin the rescue search.

Dashing towards the rubble alone - rescue dogs can work away from their handlers -- he barks loudly when detecting a survivor, played by one of the dog trainers. His reward for success? Praise and petting.

Ohno had been developing rescue robots but said while they could work long hours and in treacherous environments, they could not match canine skills to find people over a wide area in a limited amount of time.

It is critical to find the trapped within the first 72 hours as the survival rate without food or water drops sharply after that.

"I've learnt what robots can and cannot do... So I thought I could develop a new technology that can unite dogs and robots," he said.

Ohno hopes to start renting the pack this year to the Japan Rescue Dog Association, a nonprofit organisation with which he has been collaborating.

Japan is a global seismic hotspot and while newer buildings can withstand even major quakes, there are plenty of older structures and homes vulnerable to collapse.