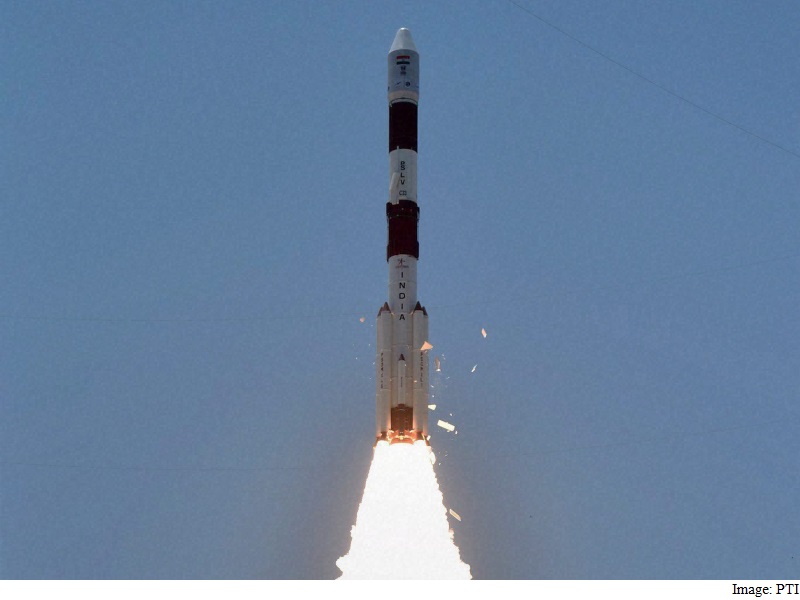 India on Thursday afternoon successfully put into orbit its seventh and final navigation satellite - IRNSS-1G - with its own rocket in textbook style.

With this, India successfully completed putting into orbit all the seven navigation satellites to complete the system in the sky.

Exactly at 12.50pm the PSLV rocket standing 44.4 metres tall and weighing 320 tonnes tore into the afternoon skies with fierce orange flames at its tail.

Gathering speed every second, the rocket raced towards the heavens amidst the cheers of Isro officials and the media team assembled at the rocket port in Sriharikota.

At the rocket mission control room, scientists were glued to their computer screens watching the rocket escaping the earth's gravitational pull.

Just over 20 minutes into the flight, the PSLV rocket ejected its sole passenger - IRNSS-1F - at an altitude of 488.9 km.

Soon after this, the satellite's solar panels were deployed.

The satellite's control was then taken over by the Mission Control Facility (MCF) at Hassan in Karnataka.

The MCF will manage the satellite's orbit raising operations firing the on-board motors till it is placed in its slotted orbit.

Simply put, the Indian Regional Navigation Satellite System (IRNSS) is similar to the GPS (global positioning system) of the US, Glonass of Russia and Galileo of Europe as well as China's Beidou.

While GPS and Glonass are fully functional global systems, the Chinese and the Japanese systems offer regional coverage and Europe's Galileo is yet to be operational.

India will formally join the select group of nations owing such system once IRNSS is declared operational after checking the systems - space (satellites), ground (ground stations) and the user-end signal receivers.

Only after the system is declared operational, will user-end signal receiver makers seriously get into the manufacture of equipment for use at the retail end, industry officials told IANS.

In other words, IRNSS could be said to be the "Indian GPS".

Apart from the civilian applications, the IRNSS will be used for defence purposes as well.

Immediately after the 1,425 kg IRNSS-1G satellite was ejected by the Polar Satellite Launch Vehicle (PSLV-C33) rocket, scientists at the mission control centre clapped their hands happily.

"The launch was succesfull," Isro chairman A.S.Kiran Kumar said soon after. The Indian Space Research Organisation (Isro) will raise the satellite to its home slot over the next couple of days.

The satellite, with a life-span of 12 years, has two payloads for navigation and ranging.

The ranging payload consists of a C-band transponder (automatic receivers and transmitters of radio signals) which facilitates accurate determination of the range of the satellite.

An Indian-owned satellite navigation system is crucial to get positional accuracy during war or a war-like situation as the country may be denied such information by countries owing similar systems during such times.

The system will provide accurate position information service to users across the country and the region, extending up to an area of 1,500 km. The full system comprises of nine satellites - seven in orbit and two on the ground as stand-by.

The total project cost including other facilities is around Rs. 1,420 crores, said Isro officials.

"The Indian system provides positional accuracy of 10 metres. For civilian usage to bloom and costs to come down, more manufacturers have to start making the navigation signal receivers. That will happen once the IRNSS is formally declared operational," A.S.Ganeshan, retired programme director of Isro's Satellite Navigation Progamme, told IANS.

Ganeshan said once the IRNSS is ready then there will be more development of application software that would be useful for different segments.

"The Indian government should mandate the use of indigenous satellite navigation systems by various government agencies and the emergency service providers so that the signal receiver makers are enthused to get into accelerated production mode," Ganeshan added.

He said once the mandatory usage is there, more software applications could be developed, thereby widening the usage.

Agreeing with him, S. Purushotham, director, Accord Software & Systems Pvt Ltd told IANS: "If there is a mandate then it will give a big fillip for the receiver makers' Make in India efforts."

"The IRNSS is a new system. We will wait and see how the market evolves so that we can decide on getting into manufacture of the receivers," S.Rangarajan, CEO of Chennai-based Data Patterns (India) Pvt Ltd, told IANS.

Once IRNSS passes all the tests, India need not be dependent on other platforms.

According to Isro, even with the operationalisation of six IRNSS satellites, the proof of concept of an independent regional navigation satellite system over India has been demonstrated for the targeted position accuracy of better than 20 metres over 24 hours of the day.

With the operationalisation of the full system, far better positional accuracy will be provided, Isro said.

Indian space agency officials said IRNSS system is unique as it consist only seven satellites while other systems in the world have more than 20 satellites.

However, while most other systems are global, the Indian system is regional in nature.

The IRNSS will provide two types of services - standard positioning service and restricted service. The former is provided to all users and the later is an encrypted service for authorised users.