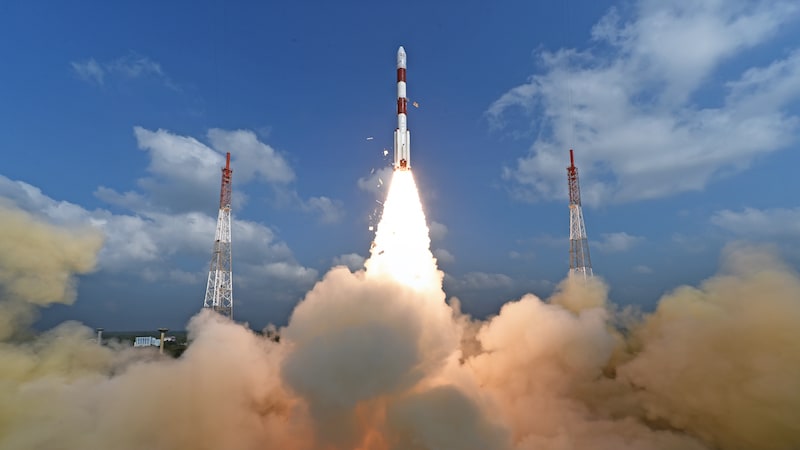 Newspaper headlines last week screamed that India's polar satellite launch vehicle (PSLV) created history by lobbing 104 satellites in a single mission, shattering the Russian record of 37. What was missed out was the intricacy required to do so.

While the numbers no doubt heightened the morale of scientists of the Indian Space Research Organisation (ISRO), some of them take pains to point out that setting a world record was really not the primary objective of the launch - though, justifiably, the event boosted the national pride.

"Frankly ISRO does not claim it wanted to set any record," K. Sivan, Director, Vikram Sarabhai Space Centre (VSSC), Thiruvananthapuram, which makes the PSLV and all other rockets for ISRO, told this correspondent on the phone.

Space scientists note that the number of satellites launched by a rocket in one mission is not comparable to scoring runs in cricket.

They say that smaller and light-weight satellites - like the ones launched in last week's mission - have made it possible for rockets to carry several of them, their number limited only by the space available in the rocket and its carrying capacity.

But what is required is a lot of engineering innovations for stacking the tiny satellites in the available space and ejecting them sequentially in the desired orbits without colliding with each other.

This is the achievement of ISRO's launch vehicle team that calls for celebration, the scientists noted.

"Each mission of ISRO has a different kind of challenge and we gain confidence by meeting the challenge," Sivan explained.

For instance, a mission in 2001 required two satellites - one of them belonging to an overseas customer - to be placed in different orbits. This was something ISRO had not done before, but its scientists took up the challenge and found a way out.

Sivan said last week's mission posed ISRO engineers the technical challenge to develop the mechanism for enabling the rocket to release, in about 10 minutes, a flock of 101 tiny satellites at the right place and time. The successful mission proved ISRO scientists' competence in executing this difficult task, Sivan said.

"That ISRO created a world record by scoring a century in space is a hype invented by the media," Y.S.Rajan, a distinguished professor in ISRO, told this correspondent over phone.

ISRO Rockets Can Take 400 Satellites to Space at a Time, Says Former Chairman

Rajan who was a close associate of late A.P.J. Abdul Kalam, the renowned space scientist and India's former President, pointed out that ISRO chairman A.S. Kiran Kumar himself has not claimed what the media played up.

In fact, in his post-launch address, the chairman tempered jubilation with sound reasoning by saying that the launch was not undertaken to set any new "record".

He said that the PSLV, after accommodating India's three satellites, had the capacity to spare for another 101 satellites from abroad. The money earned by carrying them almost halved the launch cost of the PSLV.