Chandrayaan-2 is the first space mission to conduct a soft landing on the Moon's south polar region. 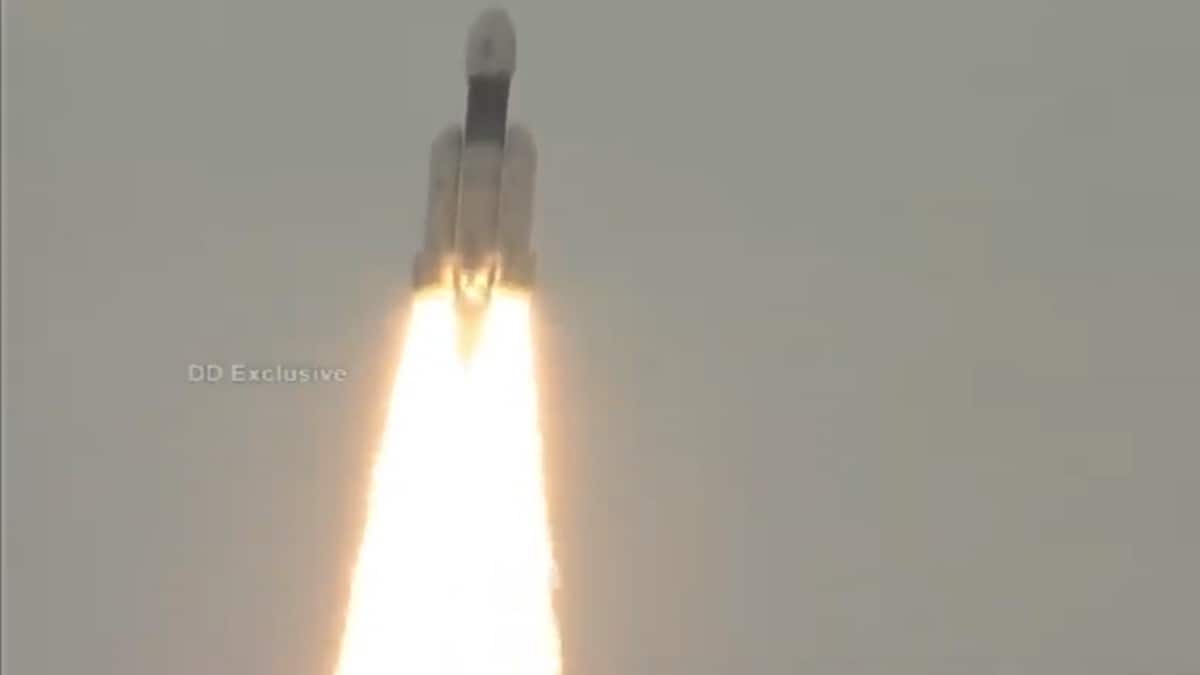 India moved towards its second tryst with the moon with ISRO's heavy lift rocket - the Geosynchronous Satellite Launch Vehicle-Mark III (GSLV-Mk III) - carrying the 3,850 kg Chandrayaan-2 spacecraft, blasting off from the Sriharikota spaceport on Monday afternoon.

The 43.4 metre tall, 640 ton rocket, nicknamed 'Bahubali' for as the hero in the successful film lifts a heavy lingam, it carries the 3.8-tonne Chandrayaan-2, which will carry out India's second mission to its closest celestial neighbour.

From there it will be a long journey for Chandrayaan-2 as the distance between the earth and the moon is about 384,400 km.

The Indian space agency will raise the spacecraft's orbit by a series of manoeuvres to put it on Lunar Transfer Trajectory.

Originally the rocket was to fly on July 15 at 2:51am. Due to technical glitch that was detected about ab hour prior to the rocket's lift off, the mission was called off that day.

The ISRO then fixed the launch day for July 22 after setting right the technical glitch.

The Indian space agency has named the lander in memory of country's space pioneer Vikram Sarabhai while the rover's name means wisdom in Sanskrit.

According to the Indian Space Research Organisation (ISRO), on the day of landing - estimated on September 7, the lander Vikram will separate from the Orbiter and then perform a series of complex manoeuvres comprising rough braking and fine braking.

The separation will come five days after the orbiter enters the lunar orbit.

Imaging of the landing site region prior to landing will be done for finding safe and hazard-free zones.

The Vikram is expected to soft-land from a height of 100 km from the Moon's surface near its South Pole and carry out three scientific experiments.

Subsequently, the six-wheeled rover Pragyan will roll out and carry out two experiments on lunar surface for a period of one lunar day which is equal to 14 Earth days.

The Orbiter with eight scientific experiments will continue its mission for a duration of one year. It will be orbiting in 100x100 km lunar orbit.

The mission also has one passive experiment from the US space agency NASA.

The Indian space agency said the mission will also try to unravel the origins of the Moon.

Both the lander as well as the rover will have the Indian national flag painted on them, while the Ashoka Chakra will be imprinted on the rover's wheels.

The success of Chandrayaan-2 mission will make India the fourth country in the world to land a vehicle and travel on the Moon surface after the US, Russia and China.

A total number of 38 soft landing attempts have been made, so far. The success rate is 52 per cent.

For this mission, it used the GSLV-Mk III, a three stage/engine rocket. The vehicle has two solid strap-on powered by solid fuel. The second stage is a core liquid fuel booster and the third is the cryogenic engine. The carry capacity is four tons.

Till date, the ISRO has sent up thre GSLV-Mk III rockets. The first one was on December 18, 2014 carrying Crew Module Atmospheric Reentry Experiment (3.7 ton). The mission was also to test the rocket's inflight structural stability.

GSLV-Mk III will be used for India's manned space mission slated in 2022.

India presently has two fully operational rockets -- the Polar Satellite Launch Vehicle (PSLV) and GSLV-Mk II -- with a lift-off mass of 415 ton and a carrying capacity of 2.5 tonnes.