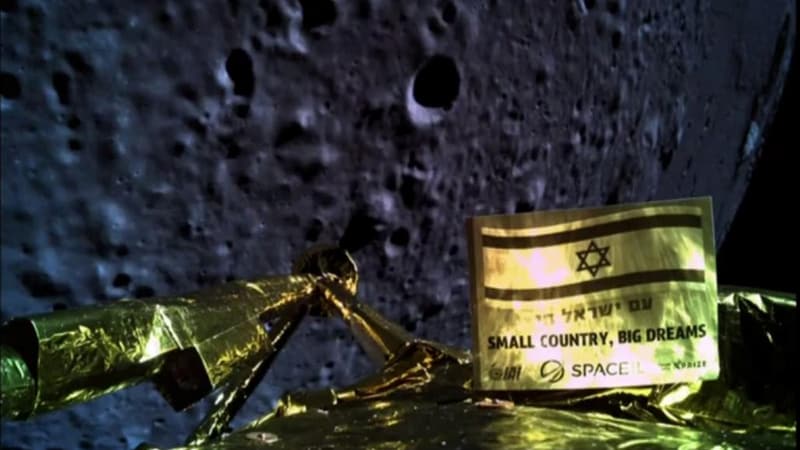 An image taken by Israel spacecraft, Beresheet, upon its landing on the moon

Israel's attempt at a moon landing failed at the last minute on Thursday when the craft suffered an engine failure as it prepared to land and apparently crashed onto the lunar surface.

"We didn't make it, but we definitely tried," project originator and major backer Morris Kahn said in a live videocast from mission control near Tel Aviv.

"I think that the achievement of getting to where we got is really tremendous, I think we can be proud," he said.

During the broadcast, control staff could be heard saying that engines meant to slow the craft's descent and allow a soft landing had failed and contact with it had been lost.

"We are on the moon but not in the way we wanted," one unidentified staffer said.

"We are the seventh country to orbit the moon and the fourth to reach the moon's surface," said another.

"If at first you don't succeed, you try again," said Israeli Prime Minister Benjamin Netanyahu from the control room, where he had been watching along with US Ambassador to Israel David Friedman.

"We reached the moon but we'd like to land more comfortably," he added. "That will be for the next attempt."

The 585-kilogramme (1,290-pound) unmanned spacecraft named Beresheet, which means "Genesis" in Hebrew, resembles a tall, oddly shaped table with round fuel tanks under the top.

Khan, a philanthropist and chairman of SpaceIL, put up $40 million of the project's $100 million budget.

Other partners who joined later are from "the private sector, government and academia," according to the IAI website.

Just before the landing attempt Netanyahu said that he was thinking about initiating a national space project.

"I am seriously considering investing in a space programme," he said in the webcast.

The country's president, Reuven Rivlin, viewed the broadcast with 80 middle school space buffs at his official Jerusalem residence, his office said in a statement.

"We are full of admiration for the wonderful people who brought the spacecraft to the moon," he said after the crash. "True, not as we had hoped, but we will succeed in the end. This is a great achievement that we have not yet completed."

Although the journey is 384,000 kilometres, Beresheet will have travelled a total of 6.5 million kilometres due to a series of orbits.

It was launched from Cape Canaveral in Florida on February 22 with a Falcon 9 rocket from Elon Musk's private US-based SpaceX company.

The one-way trip was to have included an attempt to measure the lunar magnetic field, which would have helped understanding of the moon's formation.

Google prize
The project began as part of the Google Lunar XPrize, which in 2010 offered $30 million in awards to encourage scientists and entrepreneurs to come up with relatively low-cost moon missions.

Although the Google prize expired in March without a winner, Israel's team pledged to push forward.

The Israeli mission came amid renewed global interest in the moon, 50 years after American astronauts first walked on its surface.

China's Chang'e-4 made the first-ever soft landing on the far side of the moon on January 3, after a probe sent by Beijing made a lunar landing elsewhere in 2013.

US President Donald Trump's administration announced in March it was speeding up plans to send American astronauts back to the moon, bringing forward the target date from 2028 to 2024.

India hopes to become the next lunar country in the spring with its Chandrayaan-2 mission. It aims to put a craft with a rover onto the moon's surface to collect data.

Japan plans to send a small lunar lander, called SLIM, to study a volcanic area around 2020-2021.

The United States remains the only country to have walked on the moon, with 12 astronauts having taken part in six missions between 1969 and 1972.