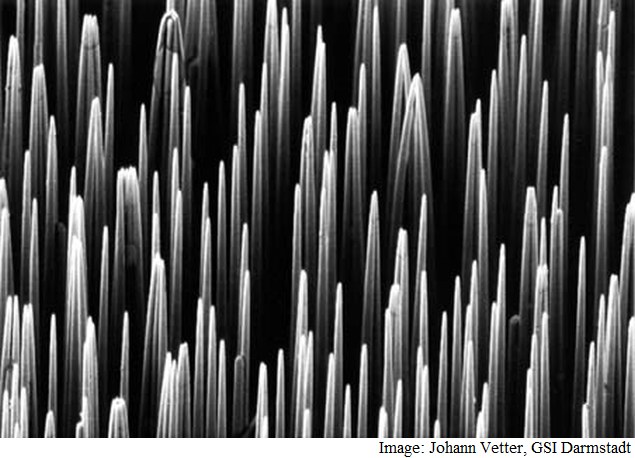 Nanowires made of vanadia can reduce cell damage in the human body, researchers from Indian Institute of Science (IISc), Bangalore have found.

This breakthrough can help develop drugs that prevent ageing, cardiac disorders, and several neurological problems like Parkinson's and Alzheimer's disease. Vanadium oxide or vanadia is a form of vanadium, an element found close to titanium on the periodic table.

Reactive Oxygen Species (ROS) are produced during normal cellular metabolism. When the level of ROS is elevated, normal redox state of cells is disturbed, leading to damage of cellular components, including proteins, lipids, and DNA.

Oxidative stress caused by ROS is responsible for various conditions ranging from a simple premature greying of hair to serious diseases like cancer, diabetes, arthritis, ageing and kidney disorders.

"Many of the antioxidant-based drugs used to control ROS, also produce ROS, though at small proportions. So we wanted to concentrate on a mechanism that mimics the natural detoxification pathways," say Professor G Mugesh and Patrick D'Silva, who led the research team.

In a paper published in Nature Communications, they have shown that vanadia nanowires actually mimic a natural antioxidant enzyme, according to a Gubbi Labs release.

ROS are helpful when their concentrations are optimal. They help in numerous biochemical reactions and act as critical secondary messengers in signalling pathways. They are also essential for the normal metabolism of the human body.

"The human body has numerous mechanisms to scavenge ROS, and specifically hydrogen peroxide. However, when people are suffering from a disease, the production of ROS shoots up, and the natural scavenging mechanisms are not able to cope with. In such cases, we may have to control ROS levels artificially," says D'Silva.

The IISc team has demonstrated that when the ROS levels are too much for the natural defence system to handle, vandia nanowires can control ROS accumulation and stop the resulting cell damage.

Therefore, the researchers treated human cells from different organs and made sure through elaborate methodology that the nanowires could efficiently enter the cells. This clearly shows that vanadia nanowires possess detoxifying abilities for a variety of cells.

Interestingly, vanadia in bulk and foam form do the exact opposite: they enhance ROS levels; hence the nanosize of vanadia is critical for its function. "It is remarkable that the material that generates ROS in bulk and foam forms, can actually destroy them at nanoscales," says Prof G. Mugesh, elaborating on the significance of the research.

With the initial positive results, the discovery needs further studies before being translated into drugs that can be administered. "We have shown that nanovanadia works at the cellular level. Next we want to focus on administering it in animals, and see how it performs," say Mugesh and D'Silva.