In 2019, astronomers using the Hubble Space Telescope found that a huge chunk of the star was blown off, triggering unusual coronal mass ejections. 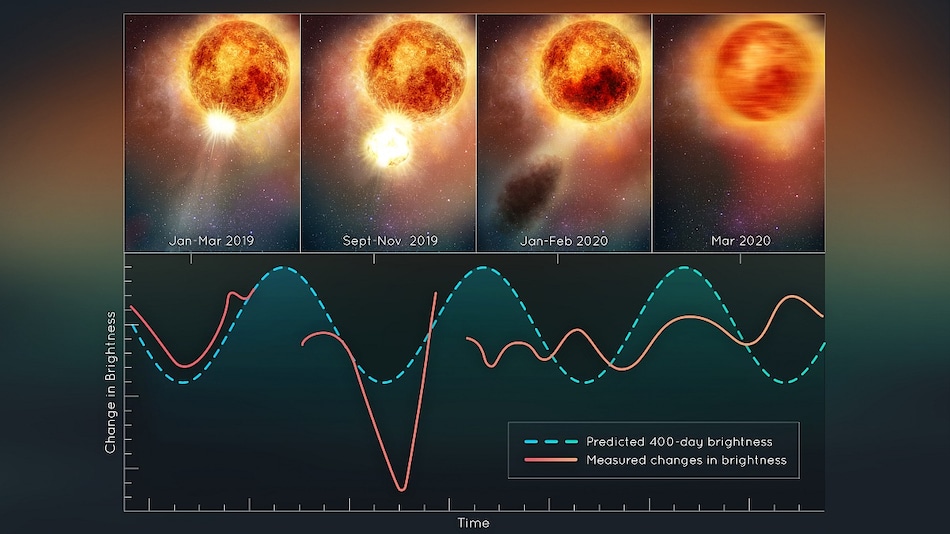 A supergiant dying star, which lost a substantial chunk of its visible surface in 2019, is healing up, according to astronomers. Named Betelgeuse, this aging star, with time, has swelled up and now measures approximately 1 billion miles in diameter. Like every dying star, the ultimate fate of Betelgeuse is that it will explode into a supernova. Evidence of the event first surfaced in 2019 when astronomers, using the Hubble Space Telescope, found out that a huge chunk of the star got blown off its surface triggering unusual Coronal Mass Ejections (CME).

A CME is a common phenomenon. The Sun, too, routinely goes through these mass ejections but the ejection witnessed on Betelgeuse was 400 billion times stronger than a typical CME. The star mysteriously darkened after the catastrophic upheaval.

This supergiant star experienced a huge mass ejection of its visible surface back in 2019 – something never before seen in a normal star's behavior.

Now, researchers have deduced that the star is recovering from the wounds it incurred in 2019.

“Betelgeuse continues doing some very unusual things right now. The interior is sort of bouncing,” said Andrea Dupree, Harvard & Smithsonian in Cambridge, Massachusetts, in a statement. She added, “We have never seen a huge mass ejection of the surface of a star. We are left with something going on that we do not completely understand.”

Dupree is now putting together the pieces and deepening the understanding of Betelgeuse's behaviour. “It is a totally new phenomenon that we can observe directly and resolve surface details with Hubble. We are watching a stellar evolution in real-time,” Dupree said.

The recent observations give a glimpse into how red stars lose mass in the later years of their lifespan. From per general perspective, the amount of mass they lose, before exploding into a supernova, should decide the fate of the dying stars. However, the unusual behaviour that Betelgeuse is showcasing suggests that the star is not going to explode anytime sooner. This contradicts that mass-loss event has anything to do with the star's imminent explosion into a supernova.

Currently, Betelgeuse is going through a "titanic convulsion" that is never seen before in the case of a dying star. The star is also expanding and has gotten so big that if placed at the centre of our universe, its outer surface could reach beyond the axis of Jupiter.