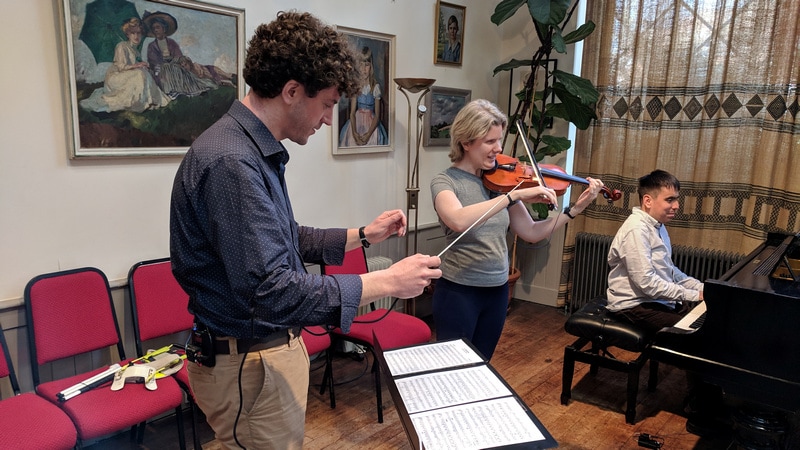 A conductor's baton has been created that allows the visually-impaired to follow its movements, opening up the potential for visually-challenged people to join more orchestras.

The 'Haptic Baton' contains sensors that pick up even slight motions. These are then transmitted via radio signals to vibrating devices attached to musicians' wrists or ankles.

They vibrate and buzz in different ways to indicate to the player the pace and dynamics the conductor wants.

Violinist Abie Baker, who went visually-challenged as a child due to a cataract operation, said she was confident that with the device she could start playing her instrument at the same time as others.

"So this is brilliant because there's no need to count in or anything. I can literally just feel a buzz or two and then know to come in and I can come in confidently knowing that it's right, which is amazing," she added.

When playing as a soloist, visually-challenged pianist Kevin Satizabal said he has previously had to sit close to the conductor and listen for their breathing to know when to begin.

"But if you're in a big orchestra and you're miles from the conductor, that's going to be really, really difficult information to pick up and this technology essentially plugs you into the conductor's movements, which is really exciting," he said.

"Orchestras won't have any excuse not to hire visually impaired musicians because the technology's right there allowing them to be an integral part," he added.

The Human Instruments device was developed by designer Vahakn Matossian. He was inspired by the 'Beat Buzz' baton which was created by his father, composer Rolf Gehlhaar, in 2017.

The 'Haptic Baton' is a prototype being tested with musicians, including the The Paraorchestra and Friends. Its development is ongoing but Matossian hopes it will be available to rent or buy in 2020.