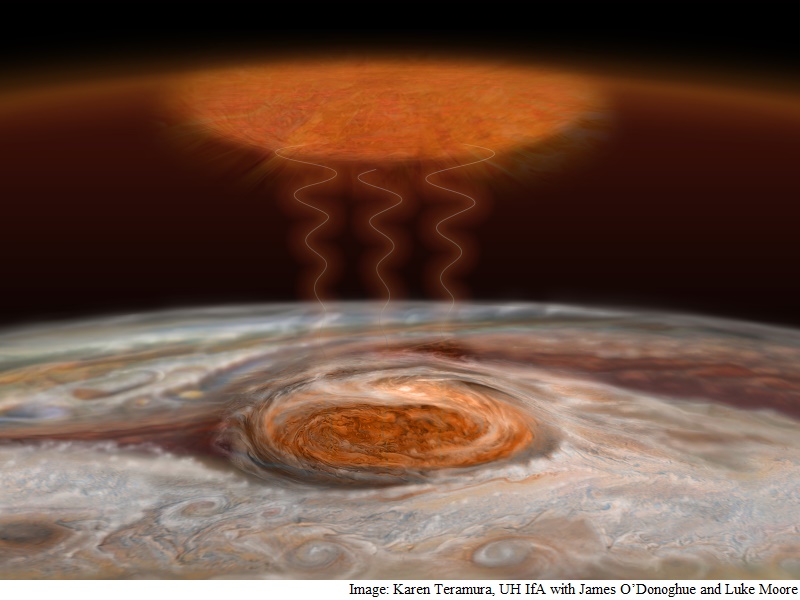 Scientists have long wondered why Jupiter's upper atmosphere has temperatures similar to those of Earth, even though the biggest planet in the solar system is five times farther away from the sun.

The answer may be The Great Red Spot, an enormous storm big enough to swallow three Earths that has been raging on Jupiter for at least three centuries, a study showed on Wednesday.

Using an infrared telescope at Hawaii's Mauna Kea Observatory, scientists discovered that the upper atmosphere above the Great Red Spot - the largest storm in the solar system - is hundreds of degrees hotter than anywhere else on the planet.

It could be a coincidence or a major clue, said Boston University physicist James O'Donoghue, lead scientist of the study published in the journal Nature.

By a process of elimination, the newly found hot spot must be heated from below, the study concluded.

The finding provides a strong link between Jupiter's upper and lower atmosphere, though the exact process by which heat is transferred remains unknown. The most-likely energy source is acoustic waves that provide heat from below, the study said.

Scientists also are unsure why the storm is brick red, nor why it has changed colour over time. In a 1900 report in the Seattle Post-Intelligencer, scientists described the oval storm as salmon pink. Recent images from the Hubble Space Telescope show it has become orange tinged and more circular.

Like a hurricane on Earth, the Spot's centre is relatively calm, but farther out winds reach 270 mph to 425 mph (430 kph to 680 kph). Because there is no land on Jupiter, which is made almost entirely of hydrogen and helium, the storm can never make landfall and dissipate.

But the storm may not be alive much longer. It has been shrinking for the last 100 years, Orton said.

More information is expected from Nasa's Juno spacecraft, which arrived at Jupiter on July 4.