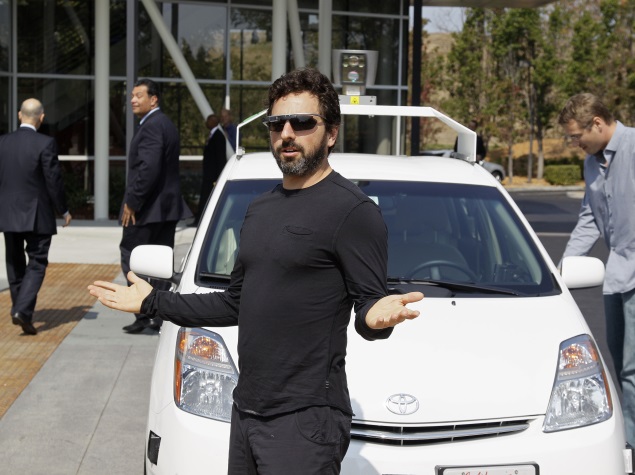 A white Lexus cruised along a road near the Google campus, braking for pedestrians and scooting over in its lane to give bicyclists ample space.

The car eased into a turn lane, waited for a green light and a break in traffic, then continued on its way in the Silicon Valley city of Mountain View.

It even avoided stopping on train tracks.

But there was nobody holding the wheel. What looked like the work of a conscientious driver was a Google car making all the moves with an AFP reporter in the back seat.

Google used machine learning to teach cars how people drive and, from there, to anticipate what motorists in surrounding traffic are likely to do.

"They don't need to stop messing with the radio to see what is happening, or even take time to move a foot from the gas pedal to the brake."

The bustling street crowd paid little heed to the self-driving car, which sported a whirling gadget on top about the size and shape of a large coffee can.

The roof-top device used radar and lasers to track everything around it.

A camera peeking out from the Lexus front grill watched what was ahead.

Data is processed by onboard computers programmed to simulate what a careful driver would do, but at super-human speeds. And, naturally, the Google autonomous car was connected to the Internet.

A "Googler" from the technology titan's test driving team had a laptop computer that showed what the car "saw" everything from cyclists and traffic signals to orange cones and painted lines in the street.

Another Googler was in the driver's seat, ready to take over in the unlikely chance a human was needed to make a driving decision.

A red button could be hit to grab control from the computer. A tap of the brake would do the same.

"If you are in a car commercial, that is driving we enjoy," said project director Chris Urmson.

"If you are commuting to work, that is not fun."

While most people have cars that boast seating for four or more people and that can achieve racing speeds, statistics show that much road time is clocked by solo drivers going closer to 30 miles (48 kilometers) per hour.

Google cars navigate using detailed digital maps showing what streets are supposed to look like, then concentrate processing power on assessing real-world variables such as traffic.

"It tells the car what the world looks like empty, then the job of the software is to figure out what is going on," Chatham said.

Have no fear
Prototype Google cars have driven more than 100,000 miles on public roads, always with someone ready to take the wheel.

There have been two accidents while cars were on auto-pilot. Both times, vehicles were rear-ended while stopped at traffic signals, according to Urmson.

"We are at the point where we are really convinced we have cracked this and can make it work," Urmson said of self-driving cars being trusted on roads.

Urmson sidestepped predicting when Google self-driving cars might hit the market, but said he is determined to make it happen by the time his six-year-old son reaches driving age.

Brin has publicly stated the even more ambitious goal of having the cars ready less than four years from now.

A panel of urban development and transportation specialists that took part in the event billed the self-driving car as a quantum leap in safety that could prevent many of the approximately 33,000 roadway deaths in the US each year.

Instead of owning cars, people could summon them when needed and be chauffeured places while they text, chat on phones, put on make-up or do other distracting tasks some motorists attempt while driving.

"This is not a science project, this is reality," said former General Motors vice president Larry Burns.

"It is something you need to embrace; there is nothing to fear."