First Round-the-World Solar Flight to Take Off Next Month 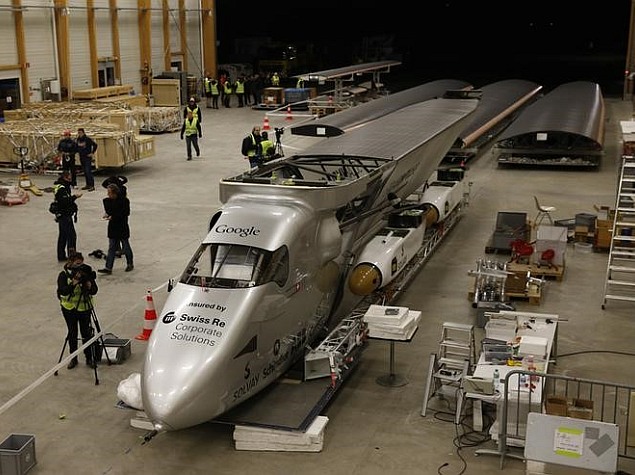 A plane with the top speed of a homing pigeon is set to embark on a landmark round-the-world flight powered only by the sun's energy, organisers said Tuesday.

Solar Impulse 2, the first solar-powered plane to be able to fly for several days and nights, will land 12 times along its roughly 35,000 kilometre (22,000 mile) trip - including a five-day stretch above the Pacific Ocean without a drop of fuel.

"We want to demonstrate that clean technology and renewable energy can achieve the impossible," said Solar Impulse chairman Bertrand Piccard, the scion of a dynasty of Swiss scientists-cum-adventurers.

"Renewable energy can become an integral part of our lives, and together we can help save our planet's natural resources."

The plane's route was unveiled Tuesday in Abu Dhabi, where it will begin the journey in late February or early March.

It will first stop at Muscat in Oman, to benefit from the Gulf's low-cloud conditions, before crossing the Arabian Sea to India and heading on to Myanmar, China, Hawaii and New York.

Landings are also earmarked for the midwestern United States and either southern Europe or north Africa, depending on weather conditions.

The longest single leg will see a pilot fly the plane non-stop for five days and nights across the Pacific between Nanjing in China and Hawaii - a distance of 8,500 kilometres.

It will take around 25 days of total flying time for Si2 to complete its round-the-world journey.

'Virtually unlimited autonomy'
Although groundbreaking in distance, the trip will not be undertaken at a lightning pace.

With flight speeds of 50-100 kilometres (30-60 miles) per hour, the entire round-the-world journey is expected to take five months to complete.

The plane is the successor of Solar Impulse, a pioneering craft which notched up a 26-hour flight in 2010, proving its ability to store enough power in lithium batteries during the day to keep flying at night.

This year's flight marks the culmination of 12 years of research and testing, organisers say.

Si2, whose makers claim it is the most energy efficient aircraft ever built, has a wider wingspan than a Boeing 747 but, thanks to its innovative design, weighs about as much as a family 4x4.

The carbon fibre, single seater plane has 17,249 solar cells built into its wings that will supply four electric motors and the rechargeable lithium batteries.

Speed at night will be limited to prevent the batteries from being run down too quickly.

Aviation enthusiasts will be able to watch a live video stream of the plane's progress once it sets off from Abu Dhabi on its pioneering voyage on the firm's website www.solarimpulse.com.

"Solar Impulse 2 must accomplish what no other plane in the history of aviation has achieved - flying without fuel for five consecutive days and nights with only one pilot in the unpressurised cockpit," said Andre Borschberg, a former Swiss air force pilot and the company's co-founder and chief executive.