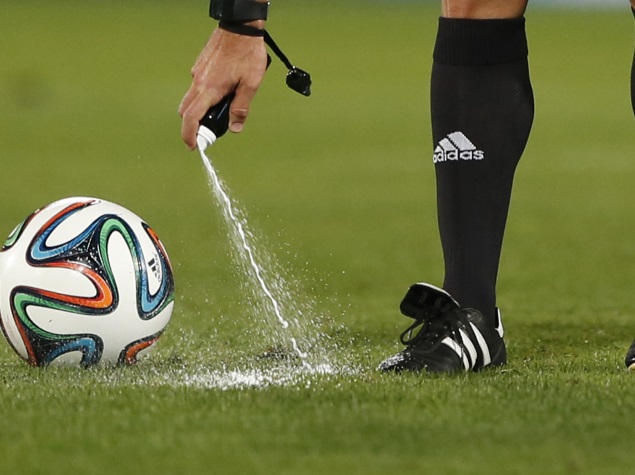 The question shouldn't need to be debated in the next five weeks in Brazil, where goal-line technologywill be used for the first time in a World Cup.

Fourteen cameras - seven trained on each goalmouth - have been hung up in all 12 World Cup stadiums. The cameras will record 500 images per second, and a computer will digest the frames. Within a second of a ball crossing the line, the referee's special watch will vibrate and flash "GOAL."

End of the debate? It should be. The designer of the system says 2,400 tests have been run in Brazil, without a mistake.

"This is the future," said Dirk Broichhausen, who heads the German company GoalControl, whose system will be used at the tournament and was demonstrated Monday at Rio's Maracana stadium.

It's also a type of technology that FIFA repeatedly balked at in the past. But the 2010 World Cup changed that when a shot by England's Frank Lampard in the second round against Germany was clearly over the line, but disallowed. That goal would have tied it 2-2. Instead Germany won 4-1. And that helped end the indecision.

"Most of the time the referee doesn't have the best vantage point for his decision - goal or no goal," said Johannes Holzmuller, who heads a FIFA program that helped implement the technology. "The same applies for normal TV cameras."

He said the human eye could record only 16 "frames" per second, no match for a high-speed camera.

Holzmuller was asked about the cost by several Latin American reporters, who said it seemed far too expensive for their leagues.

"For the World Cup, it (the cost) is quite simple. It's confidential." Holzmuller said.

Asked about it later, Broichhausen replied: "Nothing about the cost."

Different types of goal-line technology have already been used in club football, including the Hawk-Eye system in the Premier League this past season.

Holzmuller said the GoalControl system had proved reliable, even if several of its seven cameras were blocked by players. Broichhausen suggested the system could not be hacked, and FIFA has repeatedly said it's just another aid to help the referee.

"This system is not able to be manipulated because the system is off-line,"Broichhausen said. "Off-line means no internet connection. There is no possibility to manipulate or disturb anything."

The system has tested perfectly so far. That does not mean it is perfectly accurate.

Like most engineering projects, this one has a margin of error. It officially measures correctly within a plus-minus margin of 1.5 centimeters (0.5-inch), but Broichnausen suggested the real margin could be about 0.5 centimeters (less than 0.25-inch).

"All of these 2,400 goal incident were correctly recognized by the system," Holzmuller said. "So yes, we can trust the system. We are sure it works 100 percent."