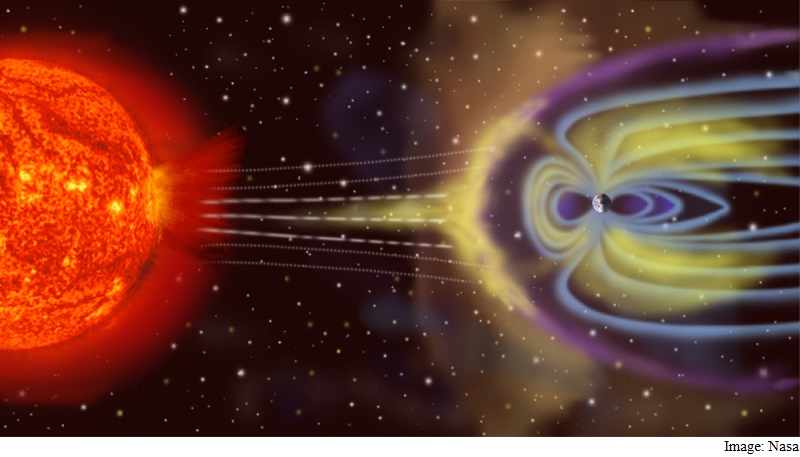 Earth-like planets orbiting close to small stars probably have magnetic fields that protect them from stellar radiation and help maintain surface conditions that could be conducive to life, new research shows.

A planet's magnetic field emanates from its core and protect the atmosphere from being lost to space.

Magnetic fields, born from the cooling of a planet's interior, could also protect life on the surface from harmful radiation, as the Earth's magnetic field protects us.

"These preliminary results are promising, but we still do not know how they would change for a planet like Venus where slow planetary cooling is already hindering magnetic field generation," said lead author and astronomer Peter Driscoll from University of Washington.

Driscoll was also curious about the effect of tidal heating on magnetic fields across long periods of time.

The gravitational tug from the star creates tidally generated heat inside the planet or tidal heating.

Tidal heating is responsible for driving the most volcanically active body in our solar system, Jupiter's moon Io.

There has been a general feeling among the astronomers that tidally-locked planets are unlikely to have protective magnetic fields "and therefore are completely at the mercy of their star."

The new research suggests that this assumption is false.

Far from being harmful to a planet's magnetic field, tidal heating can actually help it along and in doing so also help the chance for habitability.

This is because the more tidal heating a planetary mantle experiences, the better it is at dissipating its heat, thereby cooling the core which helps create the magnetic field.

In computer simulations, the team was able to generate magnetic fields for the lifetimes of these planets in most cases.

"I was excited to see that tidal heating can actually save a planet in the sense that it allows cooling of the core. That's the dominant way to form magnetic fields," the authors noted.

Since small or low-mass stars are particularly active early in their lives for the first few billion years or so "magnetic fields can exist precisely when life needs them the most".

"In the future, exoplanetary magnetic fields could be observable, so we expect there to be a growing interest in this field going forward," Driscoll added.

The paper appeared in the journal Astrobiology.