R5519 galaxy got the shape of a doughnut having a gigantic hole after a violent collision with another galaxy. 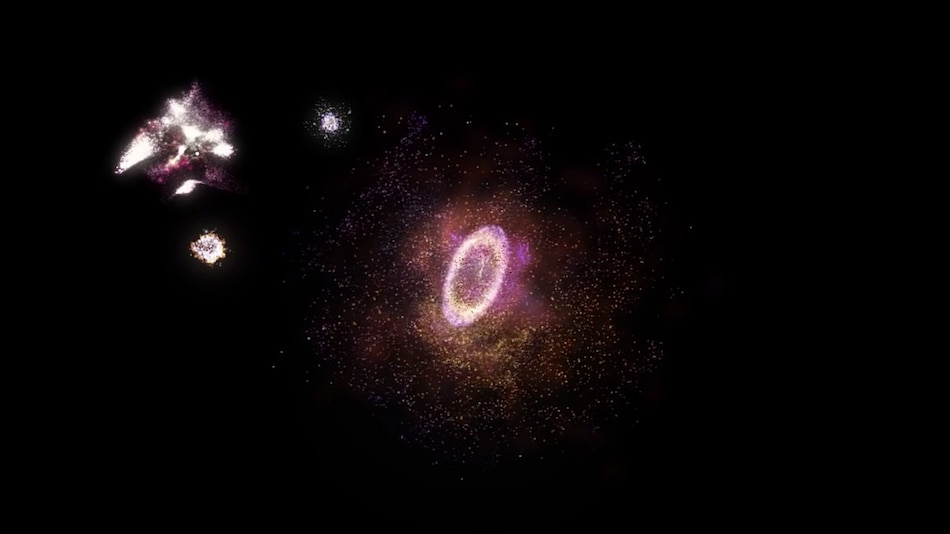 An extremely rare “cosmic ring of fire” has been discovered by astronomers located 10.8 billion light-years away from the Earth. It is actually a gigantic galaxy that has the shape of a ring in which stars are forming at a very rapid pace, thus truly making it a ring of fire. As per the scientists, it is the first one ever “collisional ring galaxy” located in the early universe and it took this shape after a massive collisional between two galaxies.

The galaxy has been named R5519 and its discovery was announced in the Nature Astronomy journal. Since it is situated so far away, light from R5519 took a very very long time to reach earth, so the images of the galaxy that were recently captured are about 11 billion years old. The ring-shaped galaxy has a hole in the middle and is roughly as heavy as our Milky Way.

The latest discovery could change the way scientists and researchers understand the formation and evolution of galaxies. “The collisional formation of ring galaxies requires a thin disk to be present in the 'victim' galaxy before the collision occurs,” said Professor Kenneth Freeman from the Australian National University. “In the case of this ring galaxy, we are looking back into the early universe by 11 billion years, into a time when thin disks were only just assembling. For comparison, the thin disk of our Milky Way began to come together only about nine billion years ago. This discovery is an indication that disk assembly in spiral galaxies occurred over a more extended period than previously thought.”

It was thought that in the early universe, galaxies had a disorderly shape and disk-shaped galaxies formed only after about 6 billion years after the Big Bang. However, based on this finding, scientists think there was a disk galaxy just 3 billion years after the Big Bang, which collided with another galaxy to attain this ring shape. This interpretation is further strengthened by another recent report that mentioned the discovery of "Wolfe Disk galaxy" that was just 1.5 billion years old.

Lead researcher Dr Tiantian Yuan, from Australia's ARC Centre of Excellence for All Sky Astrophysics in 3 Dimensions (ASTRO 3D) said, “It is a very curious object that we've never seen before. It looks strange and familiar at the same time.”

The hole at the centre of R5519 has a diameter of 2 billion Astronomical Units (distance between Earth and Sun). The galaxy is making stars fifty times faster than the Milky Way on its ring. Collisional ring galaxies like this one are 1,000 times rarer than those ring galaxies that are formed due to internal processes.