Computer-Assisted Judging Is Being Tested at Gymnastics World Championships

The expectation is that the tech - in which AI helps judges score gymnastics routines - will be used at the 2020 Tokyo Olympics. 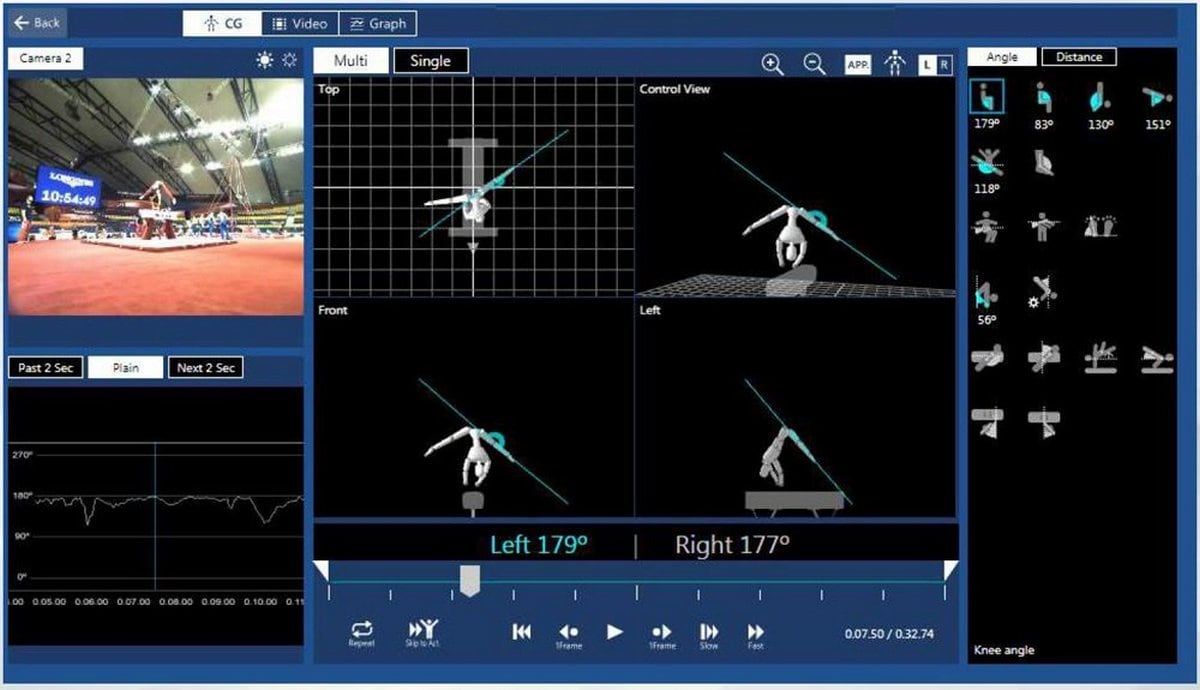 On the eve of the 2019 World Gymnastics Championships, the 527 participating athletes were asked to consent to a scan by multiple laser sensors to create a precise, three-dimensional image of their bodies.

Those images, in turn, are being used to improve the accuracy of a so-called "judging support system," developed by Japanese IT giant Fujitsu, that's being used here for the first time in competition.

The expectation, pending approval by the International Olympic Committee, is that the technology - in which artificial intelligence helps human judges score gymnastics routines - will be used at the 2020 Tokyo Olympics.

And it may presage the day when computers replace human judges entirely in the largely subjective sport, although that is not the plan "for now," officials from both the International Federation of Gymnastics (FIG) and Fujitsu acknowledged Wednesday.

"The history of gymnastics has seen cases of misjudgment," said Morinari Watanabe, president of the sport's international governing body, who hailed Fujitsu's judging-support system as a step toward "justice through technology" in a joint news conference with Fujitsu. "Gymnasts start training as early as age 3 or 5 and may train 20 years to pursue their Olympic dream. We must respect his or her 20-year efforts. Misjudgments are not allowed."

At these world championships, where Russia, China and Japan on Wednesday took gold, silver and bronze, respectively, in the men's team event, computer-assisted judging is being used on a limited basis, on four of 10 events: men's vault, pommel horse and still rings, and women's vault. Moreover, it is being used only for the "D" score, which reflects a routine's difficulty, and not the "E" score, for execution. And it is being used in one of two circumstances: when a gymnast or national governing body files an "official inquiry" disputing the judging panel's D score; or if there is a profound disparity between judges' "D" scores.

Ideally, the technology will safeguard against the pitfalls of human judging, such as judging bias, whether willful or subliminal, or simple mental fatigue on the part of judges who lose focus after scrutinizing routine after routine.

Moreover, according to Fujitsu and FIG executives, it will shorten event time by automatically generating "D" scores. They tout other applications of the computer-generated images, as well, which capture every phase of a gymnast's routine with yellow lines indicating their skeleton, along with precise data about their body positioning. For example: Are a male gymnast's arms perfectly 90 degrees from his body on the still rings' iron cross, or 89?

Such images, backed by precise data, could be invaluable for coaches during training.

"It can measure things you can't see with the human eye," noted Steve Butcher, sports director and technical coordinator for the FIG, who has worked closed with the project since 2017. "A coach may tell a gymnast that everything looks perfect, but it's not necessarily so."

The technology could also add entertainment value to TV broadcasts and cellphone apps. One day, it could represent potential revenue for gymnasts themselves, who, Fujitsu officials suggested, will be able to market and monetize their data.

Yet there are real-world concerns. Can the technology be fully protected against tampering or hacking? And how might a computer-based judging system evaluate an innovative, never-before performed skill by a gymnast who is bold enough to push the sport's boundaries, such as six-time world and reigning Olympic all-around champion Simone Biles?

Brett McClure, a former Olympic silver medalist and the current high-performance director of the US men's national team, concedes he has reflected on the range of pros and cons but favours the computer-based judging technology, seeing more good than harm in the extra set of eyes - even if those eyes aren't human.

"The potential is awesome; just to have that kind of innovation and technology available is incredible," McClure said Wednesday, after the US men rebounded from a disastrous qualifying performance to finish fourth in the team competition. "I think it's gonna take some time to work out the kinks of how it's going to be most effectively used. I think it's a sign of the times, and we've got to move with them."

Not all gymnasts, however, consented to the full-body scan, which was not mandatory. According to a Fujitsu official, more than 90 percent of athletes did, including the US men. The US women's team, however, declined.

Nonetheless, the technology can still be employed without their personal data.

Instead, their performances are evaluated against a standard body dimension, but officials concede that determining the position of athletes' joints is more precise, given the variation in athletes' muscle thickness, if the computer has individual data.

During competitions, the data collection is inobtrusive. Multiple laser sensors that look like oblong speakers are positioned around the apparatus. When the gymnasts perform, their dynamic movements are captured in multiple spots by the lasers and transmitted to the judges, helping them "view a performance" from multiple distances and angles.

Judges can call up a host of data that reveal, via the computer-generated skeleton of the gymnasts, the precise deviation of the body from the pommel horse, the piking angle of a body on a vault, the time that an athlete holds an element on still rings and so on.

Technology for the balance beam is currently under development. The hope is that by 2024, it will be perfected for all 10 events - the floor exercise being the most complicated.

Like McClure, Mark Williams, head coach of the US men's team, also endorses the technology. But he doubts it will ever fully replace human judges.

"It is a subjective sport," Williams said. "[Judging] is sort of a balancing of everyone's opinions - even the computer's. So you mix that into the equation and maybe you just double-check difficulties and angles and position and things that go into any evaluation by a judge. I think it's all fair game to get the right score."