China Launches Mars Probe in Space Race With US

China and US are taking advantage of a period when Earth and Mars are favourably aligned for a short journey. 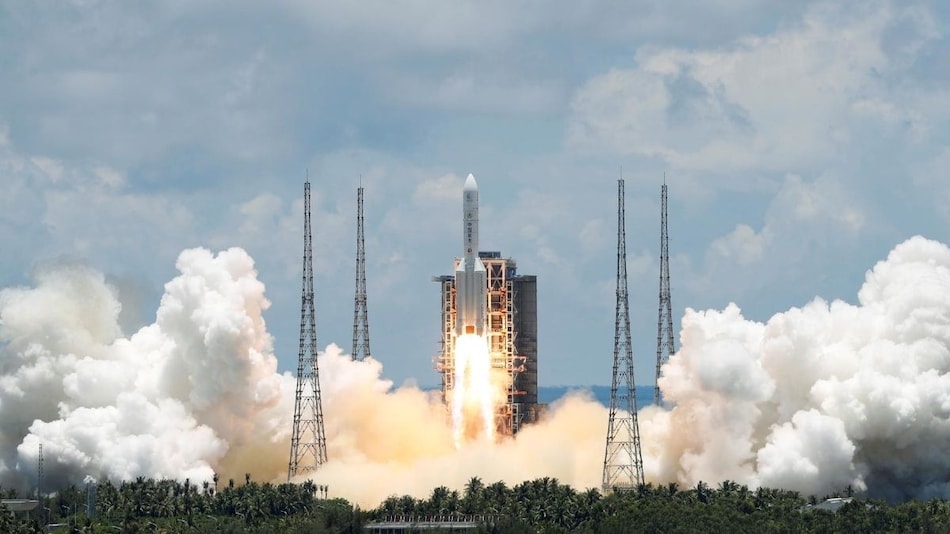 China launched a rover to Mars on Thursday, a journey coinciding with a similar US mission as the powers take their rivalry into deep space.

The two countries are taking advantage of a period when Earth and Mars are favourably aligned for a short journey, with the US spacecraft due to lift off on July 30.

The Chinese mission is named Tianwen-1 ("Questions to Heaven") -- a nod to a classical poem that has verses about the cosmos.

Engineers and other employees cheered at the launch site on the southern island of Hainan as it lifted off into blue sky aboard a Long March 5 -- China's biggest space rocket.

The mission includes a Mars orbiter, a lander, and a rover that will study the planet's soil.

The five-tonne Tianwen-1 will arrive in the Red Planet's orbit in February 2021 after a seven-month, 55 million-kilometre (34 million-mile) voyage, and deploy the rover to Mars three months later in May.

It is a crowded field. The United Arab Emirates launched a probe on Monday that will orbit Mars once it reaches the Red Planet.

But the race to watch is between the United States and China, which has worked furiously to try and match Washington's supremacy in space.

"With today's launch, China is on its way to join the community of international scientific explorers at Mars," NASA chief Jim Bridenstine said on Twitter. "Safe travels Tianwen-1!"

With today's launch, China is on its way to join the community of international scientific explorers at Mars. The United States, Europe, Russia, India, and soon the UAE will welcome you to Mars to embark on an exciting year of scientific discovery. Safe travels Tianwen-1!

NASA, the American space agency, has already sent four rovers to Mars since the late 1990s.

The next one, Perseverance, is an SUV-sized vehicle that will look for signs of ancient microbial life, and gather rock and soil samples with the goal of bringing them back to Earth on another mission in 2031.

Liu said both the Tianwen orbiter and rover will relay Mars data back to Earth, including on its morphology and geological structure, water ice distribution, climate information, and internal structure.

"As a first try for China, I don't expect it to do anything significant beyond what the US has already done," said Jonathan McDowell, an astronomer at the Harvard-Smithsonian Center for Astrophysics.

Tianwen-1 is "broadly comparable to Viking in its scope and ambition", said McDowell, referring to NASA's Mars landing missions in 1975-1976.

After watching the United States and the Soviet Union lead the way during the Cold War, China has poured billions of dollars into its military-led space programme.

"China joining (the Mars race) will change the situation dominated by the US for half a century," said Chen Lan, an independent analyst at GoTaikonauts, which specialises in China's space programme.

China has made huge strides in the past decade, sending a human into space in 2003.

The Asian powerhouse has laid the groundwork to assemble a space station by 2022 and gain a permanent foothold in Earth orbit.

China has already sent two rovers to the Moon. With the second, China became the first country to make a successful soft landing on the far side.

The Moon missions gave China experience in operating spacecraft beyond Earth's orbit, but Mars is another story.

The much greater distance means "a bigger light travel time, so you have to do things more slowly as the radio signal round trip time is large," said McDowell.

It also means "you need a more sensitive ground station on Earth because the signals will be much fainter," he added, noting that there is a greater risk of failure.

The majority of the dozens of missions sent by the US, Russia, Europe, Japan and India to Mars since 1960 ended in failure.

Tianwen-1 is not China's first attempt to go to Mars.

A previous mission with Russia in 2011 ended prematurely as the launch failed.

Now, Beijing is trying on its own.

"As long as (Tianwen) safely lands on the Martian surface and sends back the first image, the mission will... be a big success," Chen said.