Chennai Received More Rainfall on December 1 Than Any Day Since 1901: Nasa 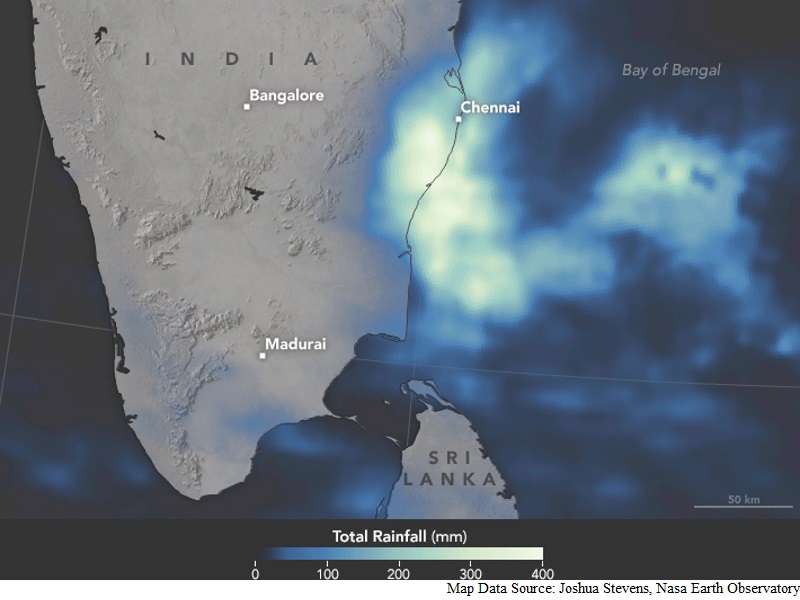 On December 1-2 flood-ravaged Chennai received more rainfall in 24 hours than it had seen on any day since 1901, according to Nasa.

The space agency Tuesday released an animated map that provides satellite-based estimates of rainfall over southeastern India on December 1-2, accumulating in 30-minute intervals.

The deluge followed a month of persistent monsoon rains that were already well above normal for Tamil Nadu, Nasa's Earth Observatory said in a blog post.

At least 250 people have died, several hundred have been critically injured, and thousands affected or displaced by the flooding that has ensued.

Nasa said the rainfall data come from the Integrated Multi-Satellite Retrievals for GPM (IMERG), a product of the Global Precipitation Measurement mission.

According to Hal Pierce, a scientist on the GPM team at Nasa's Goddard Space Flight Centre, the highest rainfall totals exceeded 500mm (20 inches) in an area just off the southeastern coast.

"Meteorologists in India and abroad attributed the rains to a super-charged northeast monsoon. In the winter, prevailing winds blow from northeast to southwest across the country, which tends to have a drying effect in most places, particularly inland," the blog post said.

"But those northeasterly winds also blow over the warm waters of the Bay of Bengal, where they evaporate a great deal of moisture from the sea and dump it over southern and eastern India. Coastal eastern India receives 50 to 60 percent of its yearly rainfall during this winter monsoon," it said.