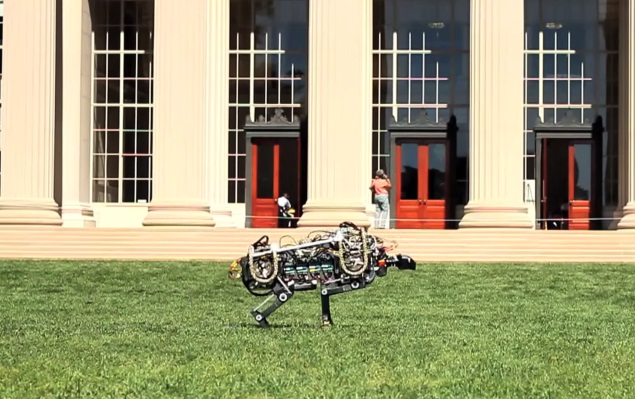 Researchers at the Massachusetts Institute of Technology (MIT) have developed a bounding algorithm to enable a robotic cheetah run and jump with super agility.

This cheetah is a sleek, four-legged assemblage of gears, batteries and electric motors that weighs about as much as its feline counterpart.

The team recently took the robot for a test run on MIT's Killian Court premises where it bounded across the grass at a steady clip.

This force-control approach to robotic running is similar, in principle, to the way world class sprinters like Usain Bolt race," said Sangbae Kim, an associate professor of mechanical engineering at MIT.

In experiments on an indoor track, the robot sprinted up to 10 miles per hour, even continuing to run after clearing a hurdle.

The researchers estimate that the current version of the robot may eventually reach speeds of up to 30 miles per hour.

The key to the bounding algorithm is in programming each of the robot's legs to exert a certain amount of force in the split second during which it hits the ground, in order to maintain a given speed.

In general, the faster the desired speed, the more force must be applied to propel the robot forward.

"By adapting a force-based approach, the cheetah-bot is able to handle rougher terrain such as bounding across a grassy field," Kim added.

In treadmill experiments, the team found that the robot handled slight bumps in its path, maintaining its speed even as it ran over a foam obstacle.

The authors are scheduled to present details of the bounding algorithm this month at the IEEE/RSJ International Conference on Intelligent Robots and Systems in Chicago.