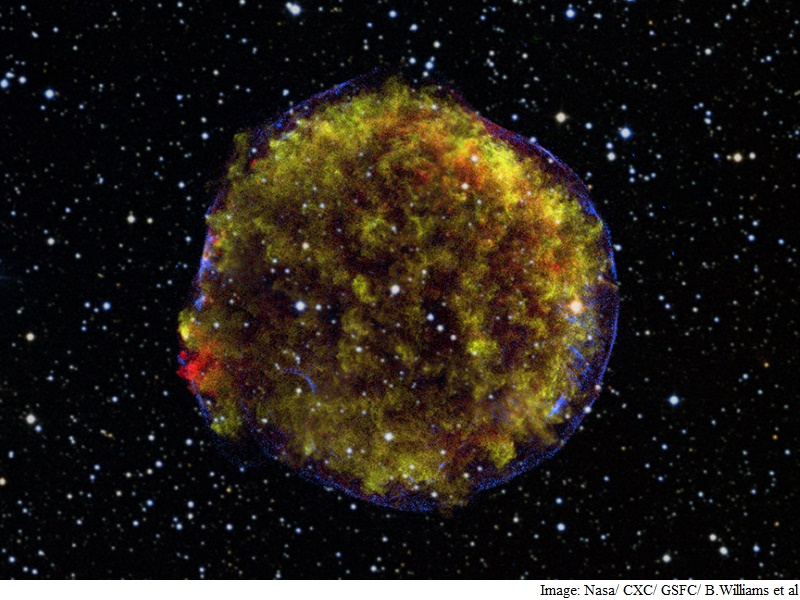 Using data from Nasa's Chandra X-ray Observatory, astronomers have created a movie showing expanding debris from an stellar explosion that was observed in 1572.

It shows that the expansion from the explosion - now known as Tycho's supernova remnant - is still continuing about 450 years later as seen from Earth's vantage point roughly 10,000 light years away.

A Danish astronomer, Tycho Brahe, wrote a book about his extensive observations of the event, gaining the honour of the explosion being named after him.

The Tycho remnant was created by the explosion of a white dwarf star, making it part of the so-called "Type Ia" class of supernovas used to track the expansion of the universe.

By combining the X-ray data with some 30 years of observations in radio waves, astronomers produced a movie, using three different images.

The researchers measured the speed of the blast wave at many different locations around the remnant.

The large size of the remnant enables this motion to be measured with relatively high precision.

Although the remnant is approximately circular, there are clear differences in the speed of the blast wave in different regions.

"The speed in the right and lower right directions is about twice as large as that in the left and the upper left directions. This difference was also seen in earlier observations," Nasa said in a statement.

This range in speed of the blast wave's outward motion is caused by differences in the density of gas surrounding the supernova remnant.

This causes an offset in position of the explosion site from the geometric center, determined by locating the centre of the circular remnant.

The astronomers found that the size of the offset is about 10 percent of the remnant's current radius, towards the upper left of the geometric centre.

The team also found that the maximum speed of the blast wave is about 12 million miles per hour.

A paper describing these results has been accepted for publication in The Astrophysical Journal Letters.