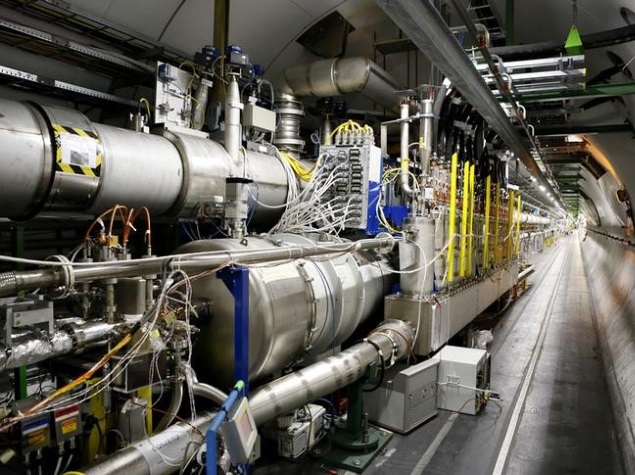 Scientists at Europe's physics research centre Cern on Sunday restarted their "Big Bang" Large Hadron Collider (LHC), embarking on a bid to probe into the "dark universe" they believe lies beyond the visible one.

Cern reported that particle beams were successfully pushed around the LHC in both directions after a two-year shutdown for a major refit described as a Herculean task that doubled its power and its reach into the unknown.

"It's fantastic to see it going so well after such a major overhaul," Cern Director General Rolf Heuer told delighted scientists and engineers as the beams moved round the tubes of the 27-km (17-mile) underground complex.

But it will be two months before particle collisions mini-versions of the Big Bang primordial blast that brought the universe into being 13.8 billion years ago begin and at least a year more before any results can be expected.

Study of many billions of collisions in the LHC's first run from 2010-2013 produced proof by 2012 of the existence of the Higgs boson and its linked force field, a long sought mechanism that gives mass to matter.

But that was part of the 40-year-old Standard Model of how the universe is believed to work at the level of the fundamental particles that make up everything in it, including life.

With its capacity to smash particles together at almost the speed of light and at a collision energy twice that of its first run, scientists hope that the revamped LHC will produce evidence of what has been dubbed "New Physics".

Among elements of this concept are the "dark matter" thought to make up some 96 per cent of the stuff of the universe while being totally invisible, and super-symmetry, or SUSY, under which all visible particles have unseen counterparts.

"If I had to bet on what we will find, I would go for SUSY," said Oliver Buchmueller, a scientist on one of the four machines around the ring that records each collision. "But we could also find something very, very unexpected," he added.

"This is what makes life on the energy frontier so exciting."

But Cern will only gradually move towards applying the full energy now within the power of the LHC, mindful of a helium leak in 2008 that forced postponement of the machine's first LHC run for two years, and an electrical fault that put off Sunday's start-up, originally set for last month, by two weeks.