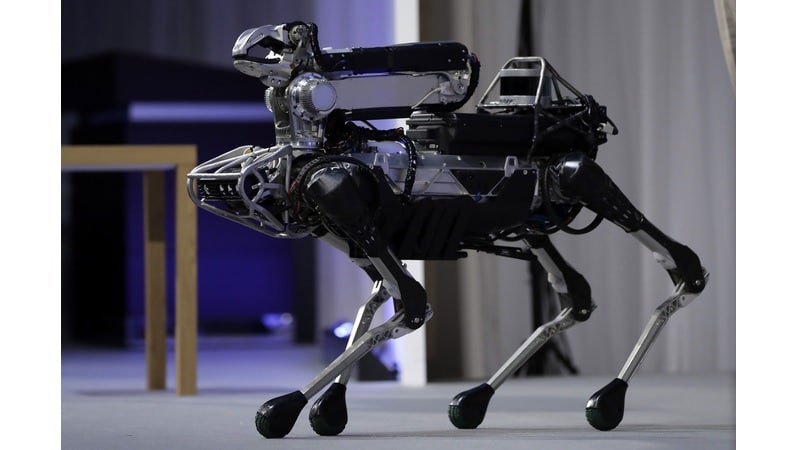 They can unload the dishwasher, deliver packages to your home and open door. And they use their thin metallic legs to traverse stairs - or crawl straight into your worst nightmares.

Now Boston Dynamics's awkward, four-legged, dog-like robot, SpotMini, is evolving from a viral YouTube sensation to a purchasable pet of sorts, according to the company's founder, Marc Raibert.

Raibert told an audience last month at the CeBIT computer expo in Hanover, Germany, that his company is already testing SpotMini with potential customers from four separate industries: security, delivery, construction and home assistance. His presentation at the expo was reported by Inverse. Raibert also predicted that his company's robots could someday be used for "warehouse logistics" or even to clean up dangerous environments like the Fukushima Daiichi nuclear disaster site, where human workers are at risk.

"This robot will be available next year," he said, referring to SpotMini. "We've built ten by hand, we're building 100 with manufacturers at the end of this year, and in the middle of 2019, we're going to begin production at the rate of about 1,000 a year."

Raibert did not reveal how much the SpotMini will cost and Boston Dynamics did not immediately respond to a request for comment.

The robotics company says the 66-pound machine is two feet, nine inches tall and remains the quietest robot the company has ever built. It's electric, has 17 joints and can run for 90 minutes on a single charge. The machine - which can haul a 30-pound payload - relies on a variety of sensors to navigate the outside world and has the ability to handle objects using an arm that vaguely resembles an ostrich's neck.

Boston Dynamics says SpotMini performs some tasks autonomously, such as navigating a previously mapped warehouse, but relies on its human owners for "high-level guidance."

"We designed this robot to be small enough so that it could fit inside of an office or a factory or a warehouse, or even someday a home," Raibert said.

A larger version of the robot - known as Spot - has captivated YouTube viewers in videos showing the machine running at fairly high speeds and regaining its balance after sustaining a human's kick. Some viewers appear to find the company's robot videos inspiring, but others consider them a terrifying, apocalyptic warning about the rise of intelligent machines.

In May, Boston Dynamics posted a 34-second clip on YouTube of its boxy humanoid robot, Atlas, going for a jog in a grassy residential area on what appears to be a bright spring day.

Srinivasa said he can foresee a robot like SpotMini being used to traverse a rugged construction site or working as a nimble caretaker for the elderly, performing all of the functions we've come to expect from service dogs. What makes a robot like SpotMini so special, he said, is that it's capable of moving across landscapes that remain off-limits for wheeled robots.

For most robots, he noted, even navigating a home full of dirty clothes piles and children's toys remains impossible.

"These robots from Boston Dynamics are incredibly rugged and robust, which makes them capable of addressing the clutter and uncertainty of our chaotic human world," Srinivasa said. "Some people watching the robot on video find their capabilities scarily anthropomorphic and human-like, but to me it shows that there is is a robot I can have in my home that will not break things or harm people."