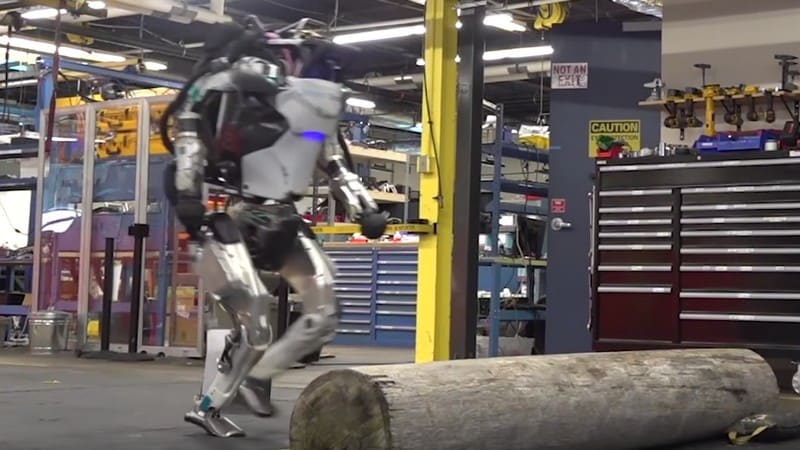 You've seen him hop on boxes, run across a field and execute backflips with the precision of a professional gymnast.

Perhaps it seems only natural that Atlas - the humanoid robot and YouTube sensation created and periodically updated on video by tech company Boston Dynamics - has begun mastering another sophisticated form of human movement: parkour.

In the company's latest 29-second teaser, Atlas can be seen jumping over a log using one leg before nimbly bounding up increasingly high wooden boxes, his mechanical limbs adjusting midair to maintain balance in a fashion that seems unmistakably human.

"The control software uses the whole body including legs, arms and torso, to marshal the energy and strength for jumping over the log and leaping up the steps without breaking its pace," the company said in a statement posted on YouTube. "Atlas uses computer vision to locate itself with respect to visible markers on the approach to hit the terrain accurately."

Boston Dynamics has become known for creating robots whose movements mimic humans and animals with a degree of accuracy that many find surprising, if not unnerving. The company was purchased by Japan's Softbank from Alphabet more than a year ago. In recent years, it has produced four-legged robots - with names like Spot, Wildcat and BigDog - that can open doors, carry heavy loads and run nearly 20 miles per hour.

Earlier this year, Boston Dynamics founder Marc Raibert told an audience in Germany that his team is testing the company's awkward, four-legged, doglike robot, SpotMini, for use in multiple industries, including security, delivery, construction and home assistance. The company says the 66-pound machine is 2 feet 9 inches tall and is the quietest of the company's robots. It runs on electricity, has 17 joints and can go for 90 minutes on a single charge.

SpotMini will be available next year, Raibert said at the CeBIT computer expo in Hanover, Germany. "We've built 10 by hand; we're building 100 with manufacturers at the end of this year. And in the middle of 2019, we're going to begin production at the rate of about 1,000 a year."

At 4 foot 9 inches and 165 pounds, Atlas - who is battery powered and guided by lidar and stereo vision - is compact and strong, able to haul nearly 25 pounds. Boston Dynamics says the robot can manipulate objects in its environment, traverse rough terrain, keep its balance when pushed and get back up when tipped over.

In May, Boston Dynamics posted a 34-second clip on YouTube showing Atlas going for a jog in a grassy residential area. The video, which captures the distinct Xerox machine-like sound created by the robot's movements, generated nearly 8 million page views.

In just one day, the latest Atlas video has already generated nearly 1.5 million page views and thousands of comments. Those comments were a typical mixture of encouragement and horror, with numerous references to Skynet and the "The Terminator."

"So there may actually be robotic FedEx delivery personnel whom I can be rude to in my lifetime," one YouTube watcher wrote. "Excellent!"

"Judgement Day is coming," another wrote.

"Still want to give up your second amendment rights?" another viewer added.

The pessimistic reactions, which seemed to dominate the comments section, were perhaps best summed up by a single line in the always flamboyant Daily Mail, which covered Atlas's latest physical feat.

"If you thought you'd be able to run away from the terrifying new breed of robots," the paper wrote, "bad news."