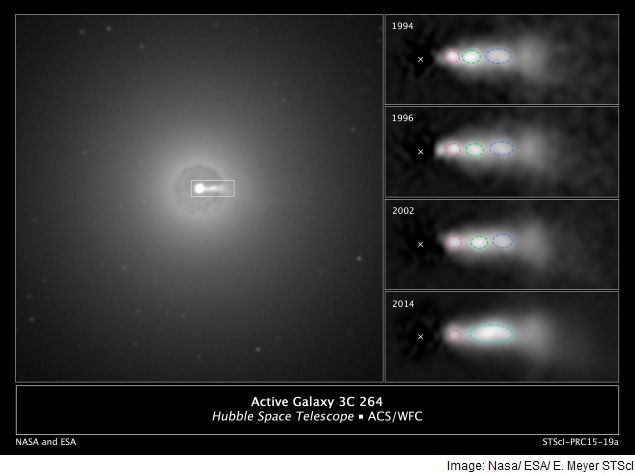 Astronomers have discovered for the first time a rear-end collision between two high-speed knots of ejected matter.

This discovery was made while piecing together a time-lapse movie of a plasma jet blasted from a supermassive black hole inside a galaxy located 260 million light-years from the Earth.

"Something like this has never been seen before in an extragalactic jet. This will allow us a very rare opportunity to see how the energy of the collision is dissipated into radiation," said Eileen Meyer of the Space Telescope Science Institute (STScI) in Baltimore, Maryland.

Meyer was surprised to see a fast knot with an apparent speed of seven times the speed of light catch up with the end of a slower moving, but still superluminal, knot along the string.

It is not uncommon to see knots of material in jets ejected from gravitationally compact objects.

"But it is rare that motions have been observed with optical telescopes, and so far out from the black hole, thousands of light-years away," Meyer added.

Such extragalactic jets are not well understood.

They appear to transport energetic plasma in a confined beam from the active nucleus of the host galaxy.

The new analysis suggests that shocks produced by collisions within the jet further accelerate particles and brighten the regions of colliding material.

The video of the jet was assembled with two decades' worth of Nasa Hubble Space Telescope images of the elliptical galaxy NGC 3862, the sixth brightest galaxy and one of only a few active galaxies with jets seen in visible light.

The jet was discovered in optical light by Hubble in 1992.

The results were reported in the journal Nature.