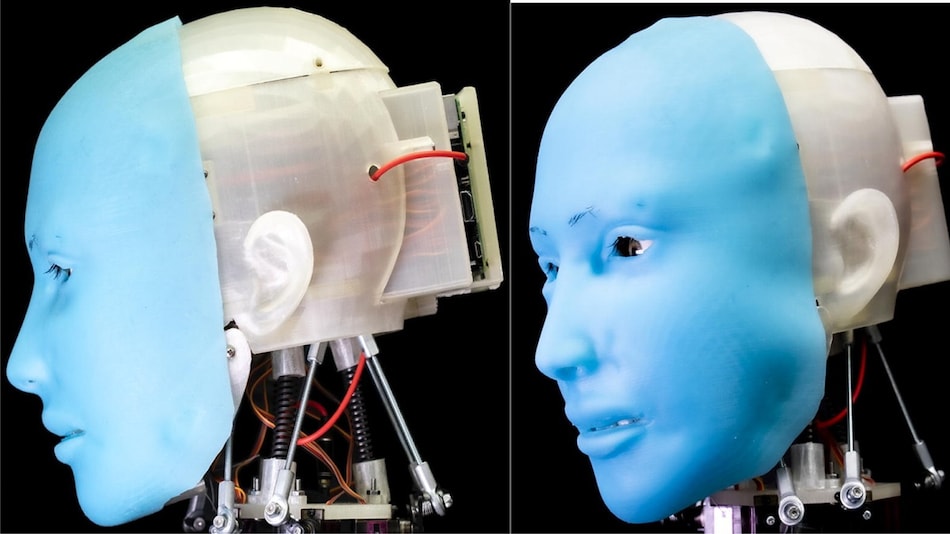 A team of scientists at Columbia University's Department of Mechanical Engineering has made a major breakthrough and developed a robot that can smile, smirk, raise eyebrows, and mimic the forehead wrinkles of humans. The artificial intelligence-powered robot, named Eva, can emulate human facial expressions to an extent not seen before in the field of robotics. While several humanoid robots have been developed in the last two decades, emotional intelligence in robots has been largely limited. Scientists who were part of this study said facially expressive humanoid robots are expensive and inaccessible to most people, thus limiting the number of researchers in this field.

This is exactly what the study titled, "Facially expressive humanoid robotic face", published in the journal Science Direct aims to change. The development can aid potential artificial intelligence researchers by providing a relatively inexpensive, open-source robot which can serve as a platform for research into emotional communication between humans and machines, scientists said.

Eva is an adult-sized humanoid head and it mimics facial expressions, head movements, and speech using 25 muscles, reads the abstract of the paper. The humanoid head has 12 facial muscles that have the capability to produce a skin displacement of up to 15 mm.

While not as sophisticated as the ones developed by organisations such as Hanson Robotics and Hiroshi Ishiguro Laboratories, Eva is capable of realistically mimic human facial expressions and head movements, scientists said. They have even shared a video of how Eva works.

What purpose does such a robot serve to researchers

A robot like Eva, scientists said, can be manufactured and assembled relatively inexpensively with accessible equipment. "Other facially expressive robots have proprietary designs and the time and cost to build an alternative from scratch is far greater than the time and cost to build upon Eva's current design," they said. The robot can also serve as a long-term platform for emotional AI research. There are organisations that offer humanoid robots on rent, but it's difficult to hire them for long-term academic research.

"Eva's modular, open-source design allows for customization and improvements to its hardware. If documented and shared, these improvements will also aid other researchers in the field," says the paper. Not just that, the robot can also be programmed in multiple languages, including Python, using open-source technologies on the Raspberry Pi.