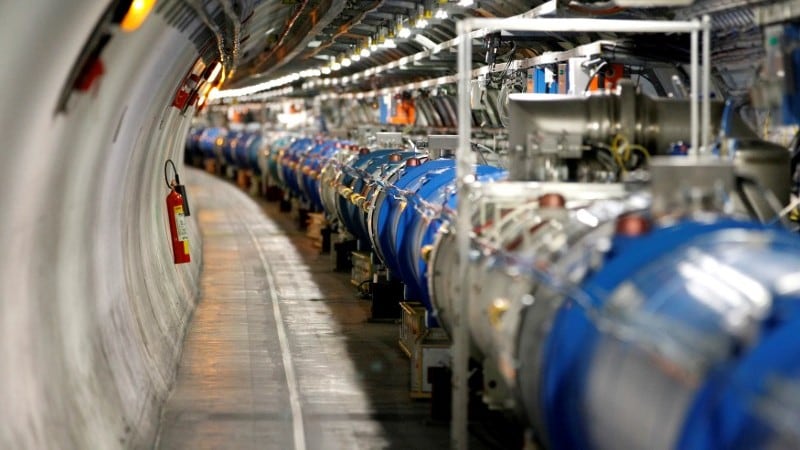 A proposed 100-km particle accelerator under Geneva has joined an international quest to develop the successor to the Large Hadron Collider to help unlock humankind's knowledge of matter.

The existing collider (LHC), which started up in 2008, smashes protons together in a 27-km circuit beneath the Swiss-French border. It helped scientists discover the long-sought Higgs boson - a particle that supplied the missing piece of the standard model of physics by explaining why objects have mass.

The FCC, or Future Circular Collider, proposed by more than 150 universities and science institutes, would be a huge tubular circuit almost four times as long, with 10 times more power than the LHC at CERN, the European Centre for Nuclear Physics.

The proposal came out of the European strategy for particle physics, which recommended that design and feasibility studies be conducted in order for Europe "to be in a position to propose an ambitious post-LHC accelerator project at CERN by the time of the next strategy update".

But the decision on whether to go ahead with the FCC - incurring an initial EUR 9 billion ($10.25 billion) bill for participating governments plus a later 15 billion euro upgrade - is effectively part of an international race to host the LHC's successor, with China, Japan, the United States and Europe all interested.

"Any big machine for the future will be a global machine," said Arnaud Marsollier, head of media relations at CERN.

"No one expects to have two 100-km colliders built in the next 20 years, so if one is built in China, maybe Europe will do something else."

The LHC is expected to keep running until around 2036-2040, by which time it will have done its job collecting data, but it might also be possible to upgrade it by increasing the energy of collisions, which would require major investment.

China has floated plans for its own 100-km collider, but has not yet confirmed it will go ahead.

Japan is expected to take a decision on a linear collider in March, which could play into a potential choice by European countries in 2020 about whether to back the FCC or another proposal for CERN, the Compact Linear Collider.

For physicists, the location may be less important than the science opportunities on offered by a new collider, allowing them to peer into the debris left when subatomic particles smash together and shatter into even smaller pieces, some of which may answer fundamental questions about the universe.

But science mega-projects attract talent and can generate unforeseen spin-offs - including the invention of the World Wide Web at CERN, which has become a global centre for physicists, despite the high cost of living around Geneva.

The discovery of the Higgs boson in 2012 earned Peter Higgs and Francois Englert the 2013 Nobel prize. They had predicted half a century earlier that it would one day be discovered.