Why Roboticists Are Raving About Google's New Robot 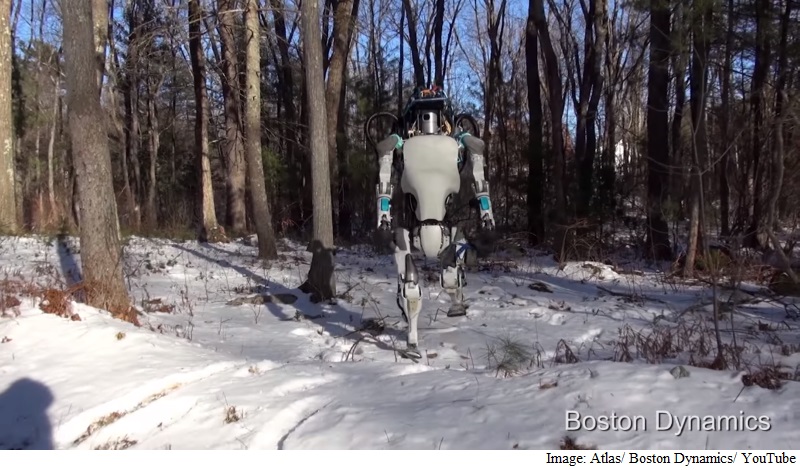 A robot's nimble steps in a snowy forest have wowed the world's robotics industry. Boston Dynamics, the secretive, Google-owned company, released video of its latest human-like robot tromping through a field slipping occasionally on uneven terrain but always catching its balance.

"They've set a new bar," said Aaron Ames, a Georgia Tech robotics professor. "It's a huge step towards getting robots that can actually operate in our world in unstructured environments on uneven terrain."

While plenty of two-legged robots can walk, none has been able to navigate uneven, unpredictable terrain.

There are no immediate applications for the average consumer, but robotics experts say the new version of Atlas is a building block toward robots that prepare our meals, fold our laundry and care for the elderly.

"That robot is out of the lab, outdoors, with no wires. It slips, but doesn't fall down," said Carnegie Mellon roboticist Chris Atkeson. "We're turning a corner in making robots better. The great unknown is when are we going to build hands and robot skin that is useful?"

Aside from the human-like ability to walk in the video, the 5-foot-9, 180-pound Atlas also places boxes on shelves, opens doors and gets back up after being knocked to the ground. Such a broad range of capabilities hasn't been seen before in one robot.

As is common in Boston Dynamics's videos, an employee plays rough with the robot to demonstrate the machine's abilities. In one scene an employee intentionally knocks Atlas to the ground. That would be unheard of previously, given that the robot is believed to cost in the hundreds of thousands. Previous versions of Atlas had ropes attached at all times to protect it from falls.

But the new Atlas has a sturdy roll cage. After being knocked to the ground, the robot gathered itself and stood back up. That ability most impressed Jerry Pratt, a senior research scientist at the Institute for Human & Machine Cognition.

"Robots are going to fall, there's no doubt about it," said Pratt, who previously competed in the DARPA Robotics Challenge with an earlier version of Atlas. Operators in the competition had to be overly cautions because of the high prices of falls.

Like Atkeson, Pratt believes the next frontier is figuring out hands and skin for robots, so they can better feel their surroundings, and interact with them. That would make it possible to do things such as chop vegetables, squeeze through tight spaces, or work in a nuclear plant that's melting down.