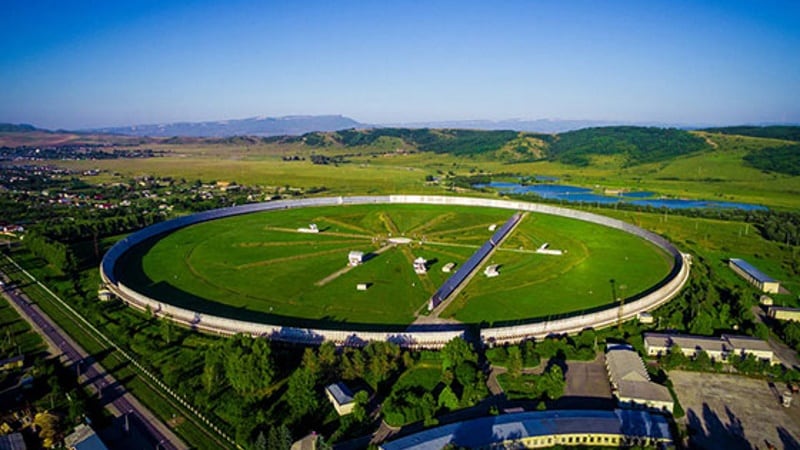 In the search for extraterrestrial intelligence (SETI), scientists can sometimes run into one particularly sticky problem. They can't describe anything as "interesting" without whipping the Internet into an alien-hunting frenzy. Case in point, the latest SETI news: A radio telescope has picked up a "signal" that Russian astronomers believe might be coming from HD 164595, a sun-size star less than 100 light years away from Earth that hosts a planet about the same mass as Neptune. The SETI Institute says it's "interesting." Cue the alien hopefuls.

But no, this probably isn't a message from aliens. It could be, but there's no reason to think this signal is particularly promising. In fact, most astronomers seem confused about why the signal is in the news.

According to the Observer, researchers circulated information about the signal to a group that included space and technology writer Paul Gilster. A slide presentation on the research was also sent out to members of the International Academy of Astronautics (IAA)'s SETI Permanent Committee. The chair of that committee, Claudio Maccone, says that the signal warrants constant monitoring. But the signal seems lacking in the qualities that would usually lead to a public announcement.

"I was unimpressed," Eric Korpela, who does SETI research at the University of California at Berkeley, wrote in a post on SETI@Home. " . . . All in all, it's relatively uninteresting from a SETI standpoint."

In an interview with The Washington Post, Korpela allowed that he could be missing some crucial information that the Russians haven't shared with the public yet. But that wouldn't be great news either - if you take your findings to the media before giving your colleagues enough information to evaluate them, you make it impossible for them to discredit (or support) your results with confidence.

But based on what he has seen of the lauded signal, Korpela is calling foul.

"Of course there is always a possibility that it is an extraterrestrial signal," he said, "but nothing about it thus far makes me really think that there's more than a one in a million chance that it is."

It appears that researchers using a radio telescope to stare at the sky saw a "significant" signal ("in the statistical sense, not in the earth-shattering sense," Korpela added) in one of 39 passes they made of the same spot.

The equipment the researchers used can't determine whether the radio signal is broad or narrow band, which is important because natural sources of radio emission (of which there are many) tend to be broad. For a signal to be considered truly interesting, scientists want a narrow band and some indication of intelligent intent. A signal needs to repeat or pulse or vary in a way that could potentially be carrying coded information.

"There doesn't appear to be anything like that in this," Korpela said. "That doesn't mean that it's not artificial, but there's not really any good reason to think that it is."

Korpela added that he wasn't sure why Maccone had sent the research out to the permanent committee. Usually, researchers will wait until they're very confident about a signal based on all the metrics mentioned above. Then, they'll share word of it with the astronomical community and look for scientists who have found (or can find) the same signal using another telescope. Only then are findings typically shared with the media.

In this case, it has been a year since the Russian scientists detected their strange signal. But no one seems to be aware of any collaborative confirmation being done during that period.

"Why is it that we're hearing about this now because one of the guys gave a talk in Moscow a year ago?" Seth Shostak of the SETI Institute asked in an interview with the Guardian. The institute is now checking for signs of the signal, as is the research group Messaging Extraterrestrial Intelligence (METI), but so far things have been quiet. And Shostak is skeptical. "Maccone's explanation is that the Russians are 'shy'. [But] it's generally accepted procedure in the SETI community if you find a signal that you think is interesting, you call up people in another observatory and say: 'Hey, here's the position in the sky,' and you see what happens," he said.

It's possible the origin of the signal sits much closer to home.

"God knows who or what broadcasts at 11GHz, and it would not be out of the question that some sort of bursting communication is done between ground stations and satellites," Nick Suntzeff of Texas A&M University told Ars Technica. "I would follow it if I were the astronomers, but I would also not hype the fact that it may be at SETI signal given the significant chance it could be something military."

This isn't the first time researchers have leapfrogged to the media, Korpela noted, but in each of the previous incidents, the radio signal turned out to come from natural sources.

"It caused embarrassment that astronomers were going around calling things aliens, and then they turned out to be natural phenomenon, so I hoped we'd learned our lesson," He said. "I guess not."