Rosetta: The End of a Space Odyssey 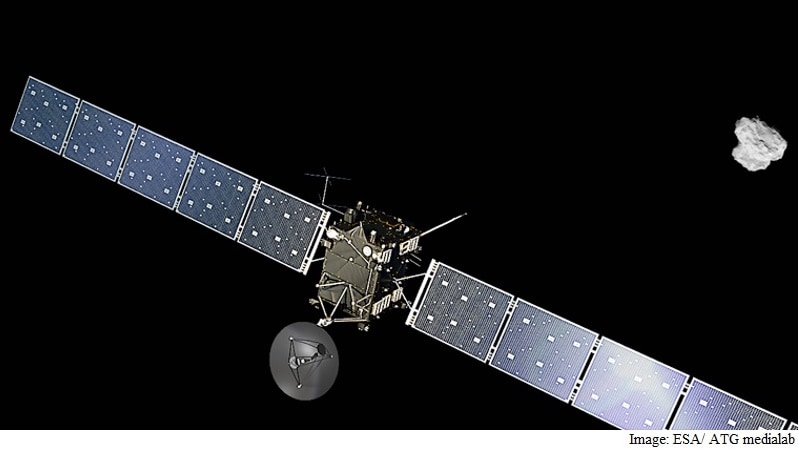 Europe's trailblazing deep-space comet exploration for clues to the origins of the Solar System ends Friday with the Rosetta orbiter joining robot lab Philae on the iceball's dusty surface for eternity.

The EUR 1.4 billion ($1.5 billion or roughly Rs. 10,493 crores), 12-year odyssey will conclude with a last-gasp spurt of science-gathering as Rosetta departs the orbit of comet 67P/Churyumov-Gerasimenko and descends over 14 hours to her final resting place.

Despite the looming end of a mission that has been formative for many of their careers, European Space Agency (ESA) scientists are looking forward to this final phase of sniffing, tasting and photographing "67P" from just a few hundred, perhaps tens, of metres (yards) away.

After dispatching the final data to Earth, Rosetta's signal will simply vanish from ground control screens at about 11:20 GMT (4:50am IST), likely with partly-uploaded data still in the system.

It takes 40 minutes for Rosetta's signal to arrive at mission control in Darmstadt, Germany, meaning its actual time of death will be around 1040 GMT (4:10am IST).

"It will basically all just disappear in one go, and that'll be it. There will be nothing else," said ESA senior science advisor Mark McCaughrean.

The first-ever mission to orbit and land on a comet was approved in 1993 to explore the origins and evolution of our planetary system - of which comets are thought to contain prehistoric elements preserved in a dark space deepfreeze.

Rosetta and comet lander Philae blasted off in March 2004, travelling more than six billion kilometres (3.7 billion miles) to reach the comet in August 2014, aided by slingshot gravity boosts on flybys of Earth and Mars along the way.

The comet chaser and Philae, which it placed on the surface in November 2014, have demystified some aspects of comets as well as adding to their enigmatic allure.

Measurements taken by the pair revealed that comets crashing into an early Earth may well have brought amino acids, the building blocks of life.

Comets of 67P's type, however, definitely did not bring water, yet inexplicably contained oxygen, scientists concluded.

Controlled impact
At this moment, the comet, with Rosetta in tow, is moving further and further away from the Sun, having made the closest solar pass on its 6.6-year elongated orbit in August 2015.

This means the orbiter's solar panels are catching fewer and fewer battery-replenishing rays.

Ground controllers faced a difficult decision -- keep Rosetta in orbit to try and make contact the next time it draws near the Sun, or sacrifice the craft for a close-up inspection?

Rosetta was never designed to land, and it was not sure to survive another loop around the Sun.

So scientists opted for "controlled impact" with Rosetta joining the already-spent Philae, its constant companion for the last two years, on the comet's surface -- though on the opposite side.

On its descent, the plan is for Rosetta to peer into mysterious pits dotting the comet landscape for hints as to what the body's interior might look like.

"It's a very, very exciting part of the mission, maybe one of the most exciting parts," Rosetta team member Claire Vallat said.

The closest Rosetta had ever been to the surface was about 1.9 km.

Final manoeuvres will take place during the night of September 29, with the comet more than 700 million km from Earth and travelling at a speed of over 14 km/second.

About 20 km from the comet, Rosetta will be instructed to break its orbit and make a 90-degree turn, heading in a straight line for 67P.

It will also be programmed to shut down on impact, so as not to pollute any deep space radio frequencies for future missions.

Rosetta is meant to reach the surface at a human walking-speed of about 90 centimetres per second (35 inches per second).

Time capsules
"It will not be a crash," flight operations manager Andrea Accomazzo stressed, though instruments and solar panels will inevitably be damaged.

Once the craft is down, there would be "absolutely no chance to communicate with her anymore," said Accomazzo. Rosetta's main antenna needs be out by a mere 0.5 degrees in order not to work.

The bold mission to probe a prehistoric time capsule had captivated the imagination of adults and children worldwide, partly thanks to a cartoon video series representing the pair as an amiable sister-brother pair on an epic and perilous adventure.

"We've had people tell us... this is their Apollo moment," McCaughrean said, referring to the 1969 Moonlanding watched in black-and-white on televisions around the world.

Some of the science teams involved have invested more than 20 years in Rosetta.

Fabio Favata of ESA's robotic exploration directorate, said he worried for them about the "the down that will come once this is over, because I think they've been living on adrenaline for quite some time."

But all is not lost.

"The mission is much more than just the spacecraft. We'll have data collected that we will have to exploit for decades," said Accomazzo.