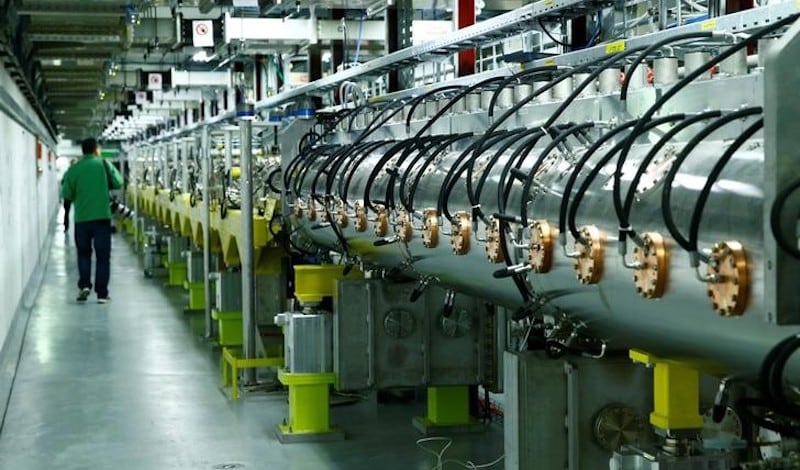 CERN is gradually upgrading its hardware to get more data from the Large Hadron Collider (LHC), its 27-km (17-mile) circular accelerator that smashes protons together at almost the speed of light to probe basic questions about the universe.

Its latest upgrade, resembling a 90-metre oil pipeline hooked up to a life support machine, replaces the 39-year-old injector that produces the flow of particles for the LHC.

"It's a brave new world of applications," he told Reuters in Linac 4's tunnel 12 metres under Geneva.

CERN has already built a version to treat tumours with particle beams and licensed the patent to ADAM, a CERN spin-off owned by Advanced Oncotherapy.

Another medical use is to create isotopes for diagnosing cancers. Since they decay rapidly, they normally have to be rushed to patients just in time to be used.

"With our portable technology they could be made inside the hospital already," Vretenar said.

His next goal is a one-metre prototype weighing about 100kgs, with which museums could analyse paintings and jewellery. The bulk of funding for the project came in a few weeks ago.

"We are building something portable," he said. "We already have a collaboration with the Louvre, and with the Italians at Florence at the Italian institute for conservation of artworks."

The Louvre in Paris is the only museum in the world that already has an accelerator, and when it is closed on Tuesdays, artefacts are taken down to the basement for analysis, he said.

Other museums don't have the same luxury, and may not want to send their artworks away for analysis.

The results take a few hours and can show which mine a piece of jewellery came from, or detect heavy elements that date and identify the paint used, revealing restorations or fakes.

"We are very careful. The intensity of particles is very low," he said. "It's not like here, there's only a few protons."