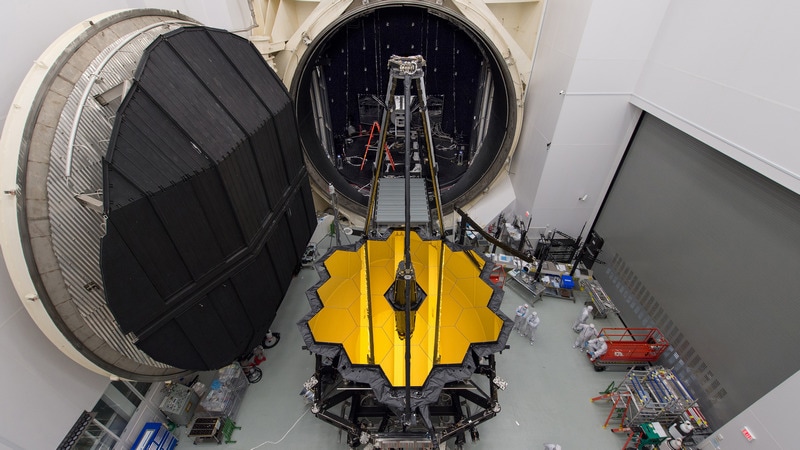 NASA's James Webb Space Telescope was supposed to be a million miles from Earth by now, peering deep into the universe and back in time to when stars were first assembling into galaxies. But its launch is still years and billions of dollars away, and mission success depends on many delicate things going exactly right. The telescope unfortunately has some screws loose.

And washers. And nuts.

Technicians discovered that rogue screws fell off during a test this spring. This was among several forehead-smacking errors and design flaws that have put off until March 2021 the launch of the telescope,which has so far cost taxpayers about $7.4 billion (roughly Rs. 50,000 crores) and now has an estimated price tag of $9.7 billion.

The travails of the Webb will be the focus of two days of testimony, starting Wednesday, before the House Science Committee. Among those appearing and certain to face difficult questions will be NASA Administrator Jim Bridenstine and Wes Bush, the CEO of the primary contractor, Northrop Grumman.

The Webb's problems have rattled many powerful constituencies. NASA is embarrassed and dismayed by the human errors that have snarled its biggest robotic science project, which was identified by the astronomy community back in 2000 as its top priority.

The US aerospace industry, which is dealing with a wave of retirements, needs to prove to national leaders that it remains as competent as when it put people on the moon. The same companies that build civilian space telescopes also build spy satellites. Earlier this year, a classified Defense Department satellite code-named Zuma was lost after it failed to separate from a rocketbooster. That satellite was built by Northrop Grumman.

An independent review board report this summer declared that the Webb is potentially vulnerable to 344 different "single-point-failures" - an extraordinary number for any mission. That meansif a single metal strut fails, or a single cable gets snagged, "we have a ten-billion-dollar paperweight sitting out there," said astrophysicist Grant Tremblay of the Harvard-Smithsonian Center for Astrophysics.

Unlike the Hubble Space Telescope, the Webb cannot be repaired in space. It will be placed more than four times farther from Earth than the moon.

Many young scientists have been counting on the Webb for research essential to advancing their careers. But they also understand that it has to be done right.

"We know once this thing goes into space, we can't fix it," said Victoria Scowcroft, an astrophysicist at the University of Bath in Britain. "We would much rather wait for a telescope in space that works than not have one."

"How prevalent are human errors?" Zurbuchen said. "How many more mistakes are there?"

NASA officials have increased oversight of Northrop Grumman. About a dozen NASA employees are embedded full-time at the contractor's Redondo Beach, California, facility and more NASA experts rotate through regularly.

Thomas Young, a former NASA official who chaired the review board, is adamant that the project should go forward, but with greater care: "There's got to be an all-out effort to try to find any additional embedded problems."

Northrop Grumman, one of the US government's largest contractors, has expressed confidence that it can present NASA with an operational telescope.

"Mission success is the cornerstone of everything we do. Getting it right is the most important thing," said Scott Willoughby, program manager for the Webb telescope at Northrop Grumman. "No, we don't need a culture change. We need people to understand how hard it is. We need people to know that we're going to get it right."

The Webb is designed to see the oldest light in the universe. It can also detect the atmospheres of planets beyond our own solar system and look for the chemical signatures of life, such as an abundance of oxygen.

In doing this, the Webb will probe two of the most fundamental questions: Where did we come from? And are we alone?

The telescope's 6.5-meter-wide, segmented mirror needs to be kept cold so that it can observe infrared light. It needs to be kept in the shade by a sun shield, roughly the size of a tennis court, that must unfurl in space.

Many of the Webb's components had to be invented from scratch - the vast segmented main mirror, the origami-like sun shield, the cryocooler that keeps the ultrasensitive instruments just a few degrees above absolute zero, the array of thousands of microshutters, each thinner than the width of a human hair, that will open and close to allow light from targeted objects to reach the telescope's sensors.

The telescope will be shipped from California to French Guiana via the Panama Canal, and will launch from the European Spaceport atop an Ariane 5 rocket.

The telescope and its instruments sailed through testing at NASA's Goddard Space Flight Center in Greenbelt, Maryland, and then at NASA's Johnson Space Center in Houston, before being flown to Northrop Grumman in Redondo Beach. That's where the telescope will be mated with the sun shield and the subsystems that provide propulsion, electricity and other functions, and are collectively known as the spacecraft bus.

In April, Northrop Grumman put the sun shield through a shake test, simulating vibrations twice as intense as expected during launch. When the test was over, technicians counted 20 screws loose out of 1,000 of them that are needed to batten down a thin material covering the sun shield.

These screws, half the width of a dime, are designed to fit into a locking nut. But the end of the screws could potentially scratch or tear the sun shield covering. Somewhere in the process, technicians had decided to add a washer to keep the screws from protruding so far. They did not realise this could impede the locking function, and some screws came up a thread short.

In another error, the wrong solvent was used in cleaning thrusters. And the wrong kind of wiring led to excessive voltage. Those three errors - the screws, the solvent, the wiring - set the project back 1 1/2 years and about $600 million, the review board concluded.

The Webb traces its origins to 1993, when a panel of astronomers proposed that NASA build an infrared space telescopewith a mirror four meters (about 13 feet) in diameter, at an initial estimated price tag of $500 million. But then-NASA Administrator Dan Goldin pushed for something more audacious.

"Why do you ask for such a modest thing? Why not go after six or seven meters?" Goldin said in a speech to astronomers in San Antonio in 1996.

John Mather, a NASA senior scientist and champion of the Webb, said the telescope could have been made smaller and simpler, but that would have resulted in a less sensitive observatory.

"It's not just another thing a little bit better than Hubble. It is dramatically different," said Mather.

"At every meeting the goal posts were shifting," said planetary astronomer Heidi Hammel, who plans to use the Webb for her research. "You could see the costs weren't being handled properly."

The telescope's costs began to cut into funding for other NASA astronomy projects. An article in the journal Nature dubbed the Webb "the telescope that ate astronomy." The Webb program has cost more than a half-billion dollars every year since 2011.

In 2010 an independent review chaired by John Casani, a veteran project manager at the Jet Propulsion Laboratory, said that "lack of effective oversight" by NASA "resulted in a project that was simply not executable."

"That's when we had to take a cold hard look and ask ourselves, is this worth going to the mat for scientifically?" Hammel said. "And the answer is 'yeah.' It was worth it."

The Webb had powerful political support from then-Sen. Barbara Mikulski, D-Md. The telescope survived its dark period and the launch date was set for 2018, then reset several times to the current 2021 goal.

Congress must now reauthorise the Webb, which is on the verge of breaching an $8 billion cost cap imposed in 2011. The current estimate of $9.7 billion includes the future costs of operations and data analysis. So far, there is no sign that lawmakers could try to pull the plug on the telescope.

"This is a mission at the very edge of what's possible," NASA's Zurbuchen said.

If the mission succeeds, it will be a triumph for NASA and the astronomy community. If it fails, it will be seen as a tragedy for science and for the many people who devoted much of their lives to this space observatory.

And critics will say, plausibly, that this was a telescope too big too fail and too complicated to work.

To Succeed in Silicon Valley, You Still Have to Act Like a Man
GM Launches Peer-to-Peer Car Sharing Service on Rental Platform