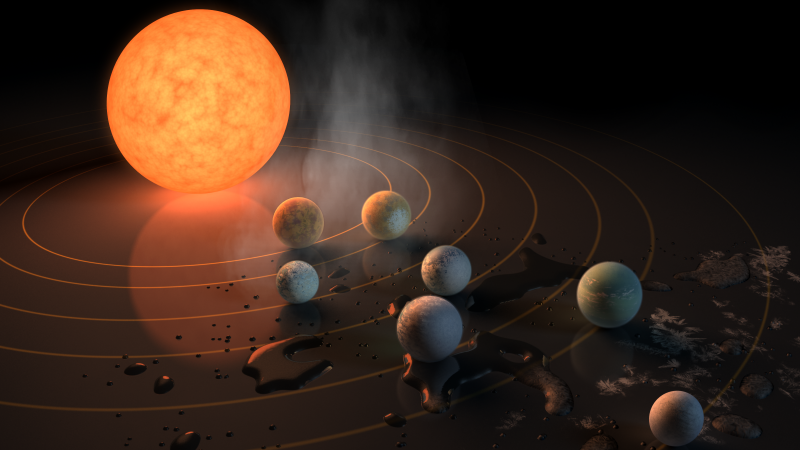 The search for lifeforms other than humans has driven mankind to search the stars for over a century. While several Earth-like, rocky planets that could support life have been discovered over the past two decades, NASA scientists have now confirmed the discovery of seven exoplanets in the same star system, the highest ever for a single system. Three of the seven planets fall in the habitable zone – an area where water can exist in liquid form, and where lifeforms can potentially exist. Curious about the new NASA exoplanet discovery and the seven Earth-like planets? Read on to get the answers to all the questions you may have on the exoplanet discovery.

The exoplanet system is called TRAPPIST-1

The seven Earth-like planets found in the exoplanet discovery are part of the TRAPPIST-1 system, named for Transiting Planets and Planetesimals Small Telescope in Chile. The exoplanet system was discovered in May 2016, when three of the planets were discovered. The number of Earth-like planets in the TRAPPIST-1 system increased to seven when the Spitzer Telescope found and confirmed more planets. The star system is 40 light years away from Earth, meaning that a spaceship travelling at the speed of light (roughly 670 million miles per hour) will take 40 years to reach it.

The TRAPPIST-1 star, called TRAPPIST-1a, has been classified as an ultra-cool dwarf star, and it is so cool that liquid water can survive on the exoplanets orbiting it closely. The planets are bunched up quite close to the star; in fact, the seventh planet is closer to its host star than Mercury is to our Sun. With the planets bunched up so close to their star, one year (time taken for a planet to orbit the star) on the planets ranges between 1.5 and 20 Earth days, depending on how far they are from the star.

Exoplanets are likely to be rocky

Scientists have measured the sizes of the seven Earth-like planets, and the respective masses of the first six. The dimensions of the planets are estimated to be similar to Earth’s, but the size varies from 25 percent smaller than our planet to 10 percent larger. The seven TRAPPIST-1 exoplanets are likely to be rocky, NASA says, based on their densities. The scientists will continue further research to find out if the planets are rich in water, and if any has water on its surface.

Since the seven TRAPPIST-1 planets are close to each other, a person standing on the surface of one of the planets will potentially be able to see the surfaces or clouds of the neighbouring planets; sometimes, the planets would even appear bigger than the Moon does to us in Earth’s sky.

Michael Gillon, lead author of the paper and the principal investigator of the TRAPPIST exoplanet survey at the University of Liege, Belgium, said this is “the best target yet for studying the atmospheres of potentially habitable, Earth-size worlds.”

NASA’s Hubble Space Telescope is being used to monitor four of the seven planets, including the three that fall in the habitable zone to see if puffy, hydrogen-dominated atmospheres are present around these planets; such atmospheres are usually found around gaseous worlds such as Neptune. The two planets closest to the star do not have such an atmosphere, which means that the two are likely are rocky in nature, NASA says.

Either always day or always night

The seven exoplanets are tidally-locked to the star, which means that only one side faces the light from the star at any point. This means that each side of the respective planet either always has day or always has light. From the surface of the fifth planet, deemed the most habitable, the ultra-cool dwarf star would appear salmon-pink in colour and 10 times bigger than the Sun appears when observed from the Earth. As the star is quite dim, the planets’ surface is said to be warm, unlike Mercury, where the temperature ranges from -173 degree Celsius to 427 degree Celsius (depending on the side facing the Sun).

Nikole Lewis, co-leader of the Hubble study and astronomer at the Space Telescope Science Institute, said that the TRAPPIST-1 exoplanets represent the best chance to study Earth-sized planets for the next decade. Apart from Spitzer and Hubble, the Kepler Space Telescope is observing the system to track small changes in the star’s brightness due to the transiting planets.

The James Webb Space Telescope, to be launched in 2018, will also study TRAPPIST-1 to detect chemical fingerprints of water, methane, oxygen, ozone, and other components of a planet's atmosphere. In addition, it will examine the exoplanets’ temperature and surface pressures. Essentially, the Hubble Telescope can detect methane and water on the planets, but those can be produced without lifeforms; James Webb Space Telescope, on the other hand, can find more complex and convincing molecular structures.

Life will most likely evolve on the planets

Dwarf stars emit X-rays and ultraviolet light, which is a deterrent for human-like lifeforms. However, being an ultra-cool dwarf, the star burns hydrogen extremely slowly and will still remain in its infancy when our Sun will ‘die’ in a few billion years. In fact, the star’s life is estimated to last 10 trillion years more, which is around 700 times more than the universe is estimated to have existed. This means that even if life does not exist there right now, it may evolve over the lifespan of the star.