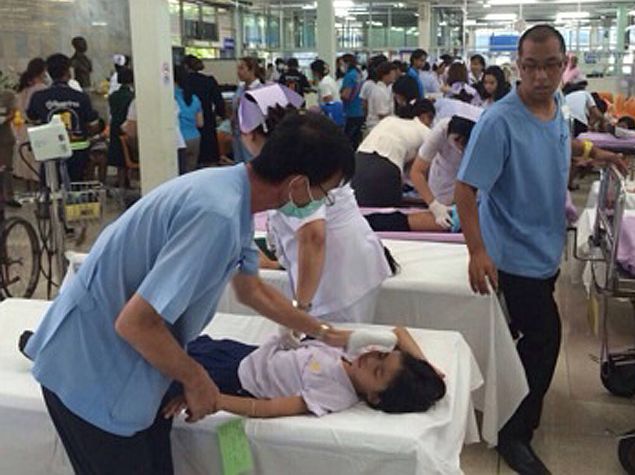 Exoskeletons helping the paralysed to walk, tiny maggot-inspired devices gnawing at brain tumours, machines working tirelessly as hospital helpers: in many respects, the future of medicine is already here.

Experts say that, at the experimental level, human skills are already being enhanced or replaced by robots and other hi-tech substitutes - and these may become commonplace just a few years from now.

"If one had spoken of this 10 years ago, people would have said it's science fiction. Today, it is a reality," French ophthalmologist Gerard Dupeyron said of one of the most advanced technologies helping people today - the bionic eye.

Last year, scientists at the University of Maryland School of Medicine in Baltimore said they had developed a creepy-crawly device inspired by the humble maggot that zaps tumours with electricity and sucks up the debris.

The finger-like prototype has multiple joints allowing it to move in several directions, according to a press release from the National Institute of Biomedical Imaging and Bioengineering, which funded the work.

The idea for the tiny neurosurgical robot was born from the difficulty doctors have to reach many types of deep-seated tumours in the brain.

Researchers were testing the safety of the device in pigs and human cadavers.

(Also See: Interview With a Robot: Speaking to Softbank's Pepper)

Inspired by crab pincers, scientists in Singapore created a tiny robot which can access a person's stomach via the throat to cut up tumours using miniature claws.

One robotic arm holds the tumour while the other slices away, according to the Nanyang Technological University (NTU), which took part in the research.

The procedure, that could take as little as 20 minutes, may one day eliminate the need for surgery, which can take hours.

The Master and Slave Transluminal Endoscopic Robot (MASTER) has been tested successfully in patients, according to the NTU.

Engineers around the world are racing to design the lightest, most autonomous robotic exoskeleton, not only to restore movement to disabled people but also to boost the strength and endurance of those who carry heavy cargo or walk very far, like soldiers or rescue workers.

Strapped to the lower body, such devices are powered by motors that take some of the strain off the muscles - similar to the brain-controlled suit that helped a paraplegic kick a football at the World Cup opening ceremony.

Several prototypes have been developed, but many battle to meet the key challenge of compact, long-lasting, carry-on power supply.

Among the recent advances in treating degenerative retinal diseases is the so-called "bionic eye", which has restored rudimental vision to dozens of people in Europe and the United States.

The system works with a chip implanted in the eye to mimic the function of photoreceptor cells, typically combined with a miniature camera mounted in a pair of sporty-looking sunglasses.

The camera sends images via a mini computer to the chip, which converts them to electrical signals to the brain, where they are interpreted as vision.

In one patent, the chip itself functions also as photoreceptor and transmitter.

A drawback for the tens of millions of people suffering from diseases like retinitis pigmentosa is the cost - these vision aids cost about 100,000 euros ($140,000) each.

To bypass human tremors and the need for large cuts for surgeons to get their hands on a deep organ, much smaller surgeon-guided robot prongs and pincers are increasingly being used for minimally invasive procedures.

They also allow for degrees of rotation and motion beyond what the human hand is capable of, and make remote surgery possible by allowing doctors to control a scalpel in robotic hands on another continent.

Saving the health sector a pretty penny in labour costs, robots are also starting to take over duties as hospital as cart pushers.

And at home, they can help the disabled communicate and be more independent - one type of robotic arm has a spoon at the end allowing for self-feeding.