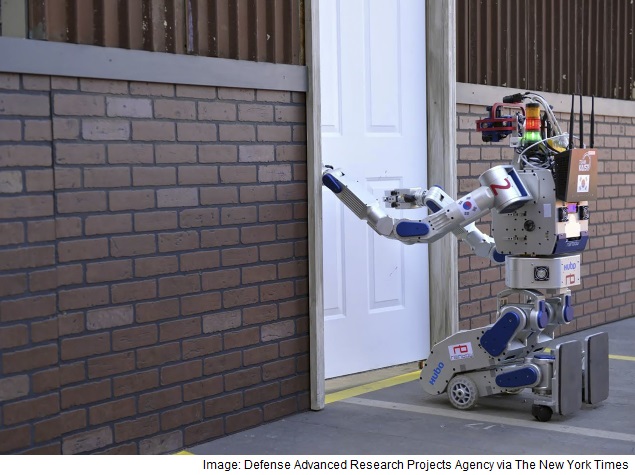 A team of roboticists from the Korea Advanced Institute of Science and Technology claimed a $2 million prize Saturday that was offered by a Pentagon research agency for developing a mobile robot capable of operating in hazardous environments.

Twenty-five teams of university and corporate roboticists competed for the prize, which was first proposed in 2012 by the Defense Advanced Research Projects Agency. The robots were graded on their ability to complete eight tasks, including driving a vehicle, opening a door, operating a portable drill, turning a valve and climbing stairs, all in the space of an hour.

The Korean victory is a validation of the work of JunHo Oh, designer of the Hubo family of humanoid robots in development since 2002. The winning Hubo is a clever machine that can kneel and drive on wheels in addition to walking.

The second-place winner, the Institute of Human and Machine Cognition in Pensacola, Florida, received $1 million, and the third-place winner, Tartan Rescue, from the National Robotics Engineering Center at Carnegie Mellon University in Pittsburgh, received $500,000.

Despite clear progress since a trial event in Florida in 2013, the robots remain decades away from the science-fiction feats seen in movies like "Ex Machina" and "Chappie."

Instead, the robots seemed more like an array of electronic and hydraulic contraptions that, in some cases, walked in a lumbering fashion on two or four legs and, in other cases, rolled on tracks or wheels. Some of the machines weighed more than 400 pounds. They were equipped with sensors and cameras to permit remote control.

On Friday, the first day of the Robotics Challenge, it took until 2:30 in the afternoon for the first robot to successfully complete the course, 7 1/2 hours after the competition began. Frequently, the machines would stand motionless for minutes at a time while they waited for wireless connections with their controllers to improve. Darpa degraded the wireless links on purpose to create the uneven communications that would simulate a crisis situation.

Reporters were once again left grasping for appropriate metaphors to describe the slow-motion calisthenics performed by the menagerie of battery-powered machines. Most agreed that "like watching grass grow" was no longer the best description, and Gill Pratt, the Darpa official in charge of the competition, suggested that it had risen to the level of "watching a golf match."

The event, which was held along parallel courses in front of the grandstands at the sprawling Los Angeles County Fairgrounds, allowed spectators to watch four teams simultaneously as operators remotely and wirelessly controlled robots from a garage area roughly a quarter of a mile away.

For the finals, the robots ran without power cords or rope belays meant to prevent them from falling. As a result, there were numerous falls as robots collapsed through doorways, tumbled backward off short staircases and keeled over while failing to grasp a valve that they were required to turn.

Despite the overriding ambience of a race run underwater, the competition also offered a real sense of drama on both Friday and Saturday, as the lead seesawed back and forth among different teams. A crowd of several thousand cheered each time one of the robots completed a task or groaned in sympathy when a machine failed or tumbled.

The event was inspired by the challenge posed by the nuclear disaster in 2011 at the Fukushima Daiichi power plant complex in Japan, where workers were forced to flee before completely shutting it down after an earthquake and tsunami.

Pratt has argued that if remotely operated robots had been available after the quake, the nuclear plant meltdowns would have been avoidable.

"During the first day or two, things could have been different; the disaster could have been mitigated," he said. "If only there had been some way to go in there despite the power being off and operate some of the emergency equipment they had."

At the trials, held at the Homestead International Speedway in December 2013, Schaft, a Japanese robotics company that had been acquired by Google, dominated the competition. The Japanese team, which had spun off from the University of Tokyo to circumvent restrictions on military research, successfully completed all of the tasks they tried.

But after their success, Google decided to withdraw the team from competition. During the finals, the Schaft technology contributed to a redesign of seven bipedal Atlas robots that were supplied to teams in the contest by Boston Dynamics, another company Google acquired.

After Team Schaft's departure, the Japanese government intervened and arranged funding from the education ministry. As a result, five Japanese teams entered the contest this year, along with teams from the United States, China, Hong Kong, Germany, South Korea and Italy.

While there was relatively modest progress toward completely autonomous and mobile robots at the event, Darpa increased its emphasis this year on the idea of human-robot collaboration as a way to complete tasks that neither humans nor machines could perform separately.

It was also clear at the event that like the Japanese, Americans appear to have a growing affinity for robots. The contest was accompanied by an extensive exhibition in which dozens of companies, national laboratories and universities demonstrated robots to an appreciative crowd that included many children.