Leaving the laboratory behind 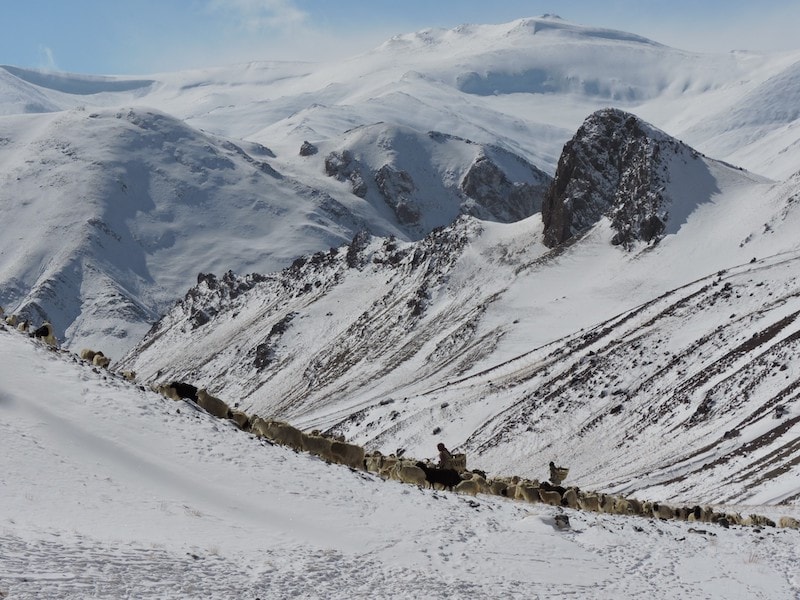 Over one-third of the land area of the globe is grazed by livestock. An increasing portion (1.4 percent per year, totalling 752 million in 2012) of the world's poor (people living on less than $2, or around Rs. 150 each day) are rearing livestock. A large portion of the global food economy depends on livestock products. Not only does this drive people and their livestock closer to wildlife, but consequently increases potential for disease transmission between livestock and wildlife. This impacts both agricultural livelihoods and wildlife conservation.

While these facts were the inspiration my mind was far from them, as I and Tanzin Thuktan aka Dhamal took cover under the rocky overhang. The blizzard had started, the temperature was well below freezing; all this in the summer that is July. Nothing is quite predictable in the trans-Himalayan region of Spiti, a land seemingly beyond both the clouds and the imagination. We were on the trail of the Blue Sheep, the prized food for the elusive and rare Snow Leopard.

A female Blue sheep with its kid in the Lukdur plateau in Spiti. These are key prey for the elusive and rare snow leopards in this region.
Photo Credit: Munib Khanyari

Healthy livestock means increased livelihood security of herders, and healthy wildlife means the equilibrium of the high Himalayan ecosystem, which is so vital in shaping the region's climate and being the source of various major rivers, is maintained.

However, there is good reason as to why disease remains understudied in the high mountains. Often this requires collection of samples in frigid and extreme weather conditions while walking long transects. These samples then need to be meticulously stored, often in different hazardous reagents before getting transported to laboratories that are generally several hundreds if not thousands of kilometers away to be tested using specialised equipment.

Additionally, it is difficult to obtain permits to transport samples out of the study area and even when obtained the prolonged travel time can significantly degrade them. All of this is a logistical, financial and technological burden.

Studying microscopic organisms in the field

My endeavor would have been a step too far as well, had I not been lucky enough to chance upon the Iolight portable microscope. Studying disease means looking for pathogens or disease causing-organisms that are often microscopic. I study gastro-intestinal nematodes (GINs), or in easier terms, worms in the stomach. To do so, it requires that we track our species of interest, wait for them to defecate, collect the feces and examine it under the microscope to find eggs of different GINs.

This is what using the Iolight linked to its app on a handheld device looks like.
Photo Credit: Munib Khanyari

If the feces isn't fresh, the eggs either hatch or dry out, thus evading being quantified. How many GINs and of what types there are in our species of interest give us a sense of potential cross-transmission.

Back in Spiti, the blizzard finally, subsides… Dhamal and my eye-lashes are frozen and small icicles are formed on our beards. We spot a herd of Blue Sheep. Concealing ourselves behind the ridge, we wait for them to defecate. Once they do and move away, we get onto the scene and set-up our “field laboratory”. The Iolight microscope is about the size of a large wallet.

Once switched on, it forms a its own wifi hotspots which connects to the pre-downloaded iolight app on my phone; being the “eyepiece” of the microscope. Dhamal crushed the fresh feces using his gloves hands and we place and examine about 5 grams of it under the microscope. The iolight even has a function that allows you to take a picture, which gets saved in your phone's gallery such that you can archive it or identified your subject later. Having a portable microscope enables in-field analysis of samples which improves efficiency and ease of robust science.

It allows for data to be simultaneously collected and analyzed, not only reducing transportation and storage cost, but also enabling long-term studies which give us researchers a true sense of the disease dynamics in a system.

This is a revolutionary step in studying diseases in wildlife and livestock. It was only a decade ago when the lack of such portable microscopes resulted in either disease studies being sparse, or contained in space or time. This often resulted in practitioners not having enough spatial or temporal data to base meaningful disease related interventions on.

Here, I am seen using the Iolight in a tent. In the background is an abandoned standard compound microscope, which due to its size and lack of clarity, is rather field unfriendly.
Photo Credit: Munib Khanyari

This has proven devasting in so many instances, with herders often losing majority of their herds to disease events, or wild populations being decimated with them. Portable microscopes like the Iolight have exponentially increased the rate of gain of information which means interventions are drafted more efficiently such that people's livelihoods are safeguarded alongside conserving the beauty and the balance of the natural world.

Like with most thing, beyond the many benefits, there are a few down sides to the Iolight microscope as well. Working is cold climates means that the battery of both the microscope and the phone that it connects to get drained often. And in a landscape with human settlements being a day's walk or sometimes even more, away, often with limited electricity, that can be a bottleneck.

This can be overcome by using solar charges, but the frequently overcast, snow-laden trans-Himalayan skies can offer so much on that account.

While growing up, my father would always suggest that one can only learn and grown when one gains new perspective. Looking at the microscopic world through the perspective of the Iolight has really taught me so much more than I could have ever imagined.

Munib Khanyari is a PhD student at the University of Bristol and Oxford University in the UK. He collaborates with Nature Conservation Foundation's High Altitude Program to study disease transmission between wildlife and livestock in the Trans-Himalayas. While his feet shift from time to time, his head remains eternally in the mountains. He posts as @munibkhanyari on instagram and @KhanyariMunib on Twitter.