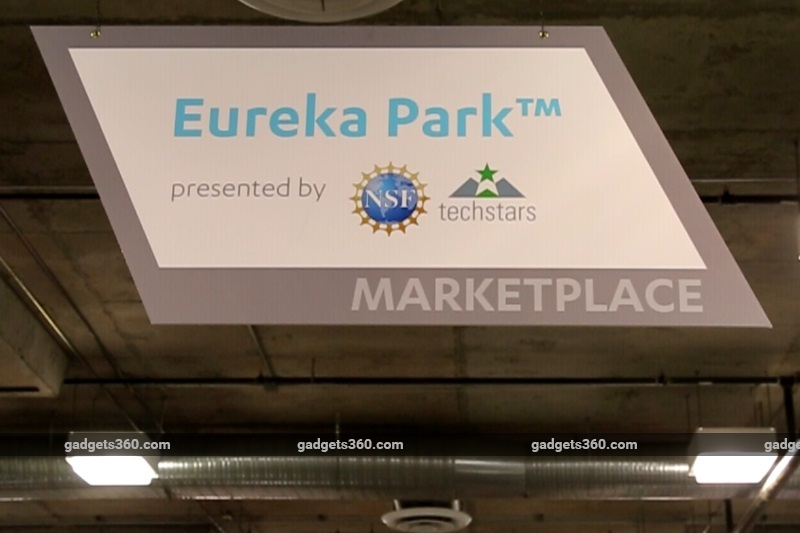 Every year, CES plays host to the world's biggest electronics companies as they show off their latest and greatest products. Many of the displays are put on solely for bragging rights and to grab media mentions - the world's biggest and most impractical TVs, sports cars kitted out with all kinds of gadgets, and even acrobatics performing all kinds of stunts. Sony, Samsung, LG, Panasonic and dozens of other huge names occupy prime convention centre floor space with enormous, elaborately constructed booths that rival the glamour of some of the surrounding Las Vegas hotels.

And then there's the other side of CES, a special zone called Eureka Park, where no-name startups and individuals, often with barely more than an idea and a Kickstarter or Indiegogo page, vie to get their first whiff of exposure. With just one table and only enough space for a few posters, these exhibitors spend all day pitching their big ideas to the media and anyone who might be interested in supporting, collaborating with, or buying them outright.

In a year with very little core innovation on display from the big brands, this is where all the excitement really was. At CES 2016 there were 500 small exhibitors from 29 countries, up from 375 last year. Each one had something innovative to show off, and a lot of them were ideas formed around IoT. Some were prototypes while others were in advanced stages of production. The exhibits ranged from practical everyday items that might soon be on everyone's gadget wishlist, to imaginative amusements or tools for very specific niches.

There were plenty of apps and services in addition to physical products. What each one had in common was that its developers were passionate and committed enough to really try to make a breakthrough. We walked the length and breadth of Eureka Park and here are our ten favourites from the show floor.

1. eBlocker privacy appliance
This German startup wants to secure your digital world not by using software, but by hooking into your home network. It's an appliance that plugs into your home router and traffic is then routed through the eBlocker. This lets it strip out ads, spoof your device type, and even obfuscates your device identifiers so websites can no longer build a profile of you based on your surfing history.

The advantage is that all smart devices on the network are covered, not just PCs on which you can install a plugin or cloud service client. The device will be available at half price during its Kickstarter campaign, but if you're willing to put together your own hardware, you can get the eBlocker software for free. A yearly subscription will get you constant updates.

Designed primarily for children aged six and up, Makerbloks can teach anyone about electronic circuits and components. Each colour-coded block represents a type of component and has magnetic contacts that will only pair with compatible blocks. There's an interactive digital comic-book guide that turns circuit-building into a game, with Bluetooth syncing to trigger rewards when tasks are completed. Makerbloks are available in kit form and the company plans to take them into schools to promote science learning.

3. Looxid Labs LX-I eye-brain interface platform
Much more of a concept than an actual working demo, Korean startup Looxid Labs' LX-I had a lot of people talking. The premise is that a simple headset to track eye movements and EEG brainwave patterns can be used to monitor what a person is looking at, and what he or she is willing it to do, and then turn that information into real-world actions. It can be used to monitor learning and cognitive performance as well as controlling computer interfaces. 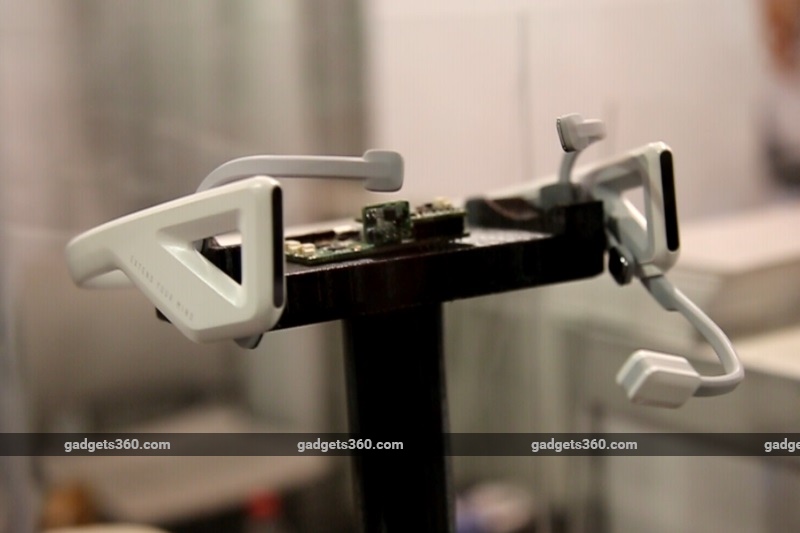 The team imagines that the platform will be used not only in education but also as a VR and gaming controller, behavioural research tool, and physical aid for those with injuries or disabilities. What we saw was little more than a demo of input signals being registered on a graph, but the team is working towards launching a developer kit this year.

Current Braille e-readers have only a single line of characters and are clunky as well as expensive. Polymer Braille grew out of a North Carolina State University research project and aims to build a working tablet-style device with a screen made up of essentially an array of Braille dots which can display roughly a full page of information at a time and then change its contents like any other screen. The team has worked on shrinking the mechanics necessary for each of the clusters of raised dots with the right height and tactile feel.

If you've ever looked at a new product and wondered who on earth would ever want or need such a thing in their lives, you'd probably have the same reaction upon seeing the Spun team for the first time. The prototype on display was a "smart spoon" that can pair with an app in order to track what and how much you eat, with presumably more accuracy than manual input would deliver. You have to take a photo of your plate and tell the app what exactly is on it by circling areas on the image, and then the spoon will use pressure and 3D positioning sensors to track your intake. It all falls apart if you rotate your plate, but of course this is an early prototype. Those who need very fine-grained tracking of food intake, for medical or any other reason, might find something worthwhile about the Spun. At the very least, it's a fascinating example of what's possible today. 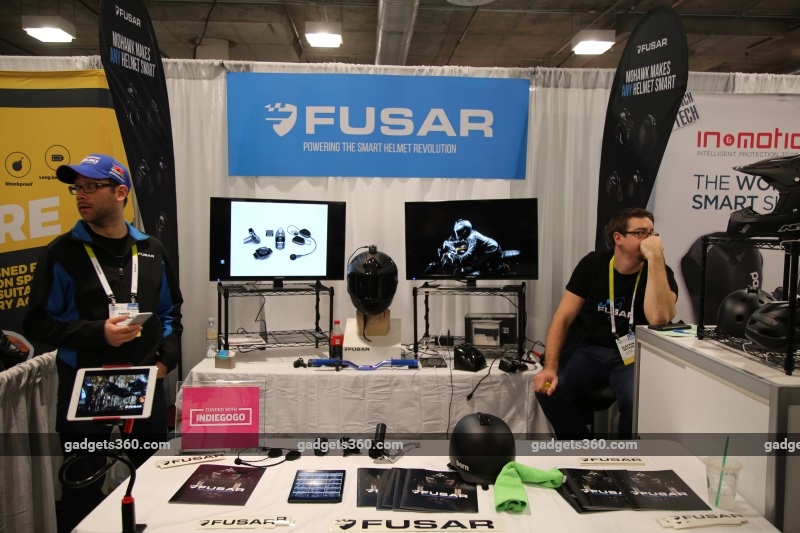 Action sports are dangerous, especially those that involve vehicles of any kind. Fusar's Mohawk is a helmet attachment with multiple purposes - it can be an action camera and motion tracker but also a wireless communications hub with emergency features. You can take videos of your adventures and share them over the Internet, communicate hands-free, track routes and distances covered, and get weather alerts and directions. It can detect sudden crashes and automatically alert your predefined emergency contacts, and the last two minutes of audio, video and sensor data are always recorded like a black box. It is of course weather and dust resistant, and can be attached to a variety of types of helmets. 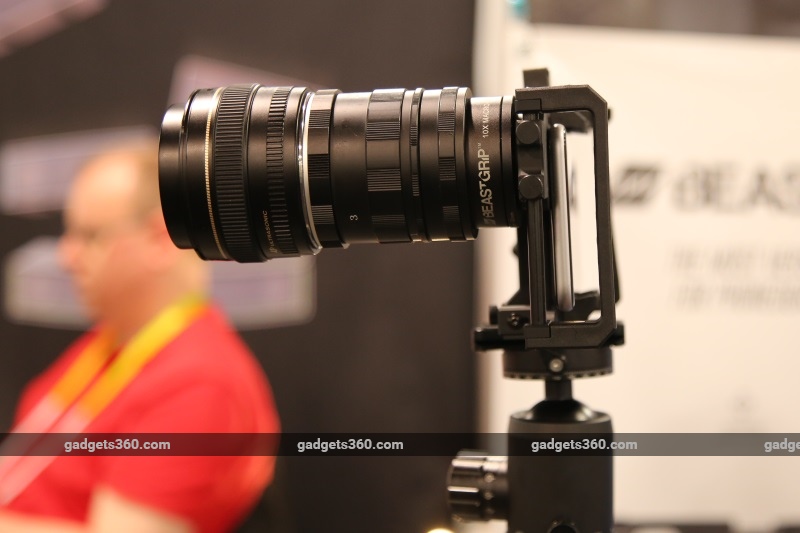 Phones and their cameras are getting more powerful all the time, but the one thing you can't shove into a slim candybar device is a professional lens. Various methods of pairing aftermarket lenses with smartphones have come along, but Beastgrip aims to be the easiest and most versatile. It calls itself the "world's first universal lens mount and rig system", and it has a number of moving parts to let you securely attach and align DSLR-quality lenses to pretty much any current-day phone. Use your filters, tripods, mounts, mics, lights, and other accessories while maintaining a steady grip. You don't get autofocus or aperture control through the phone's interface since there's no electronic or mechanical connection with lenses, and the Beastgrip website has information about what you can and can't do with a variety of lens types. 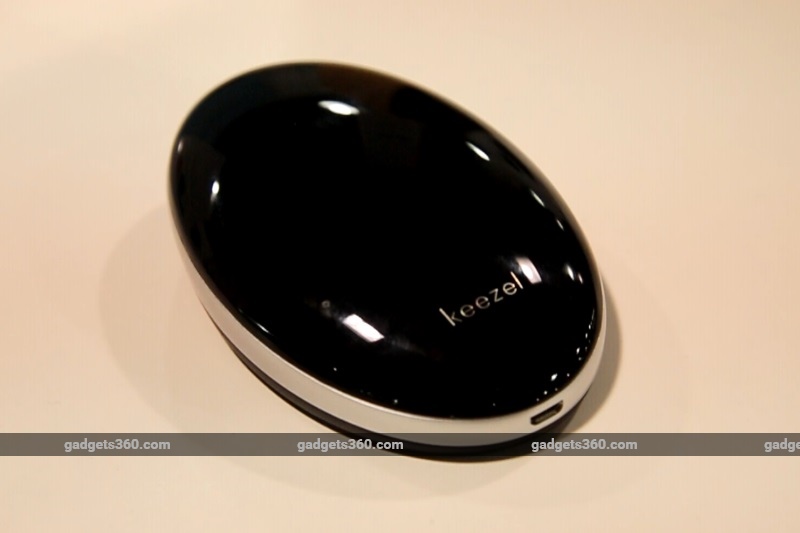 VPNs are used not only to safeguard sensitive data as it travels over the Web, but also to get around geographical filters and blocks. Most are software-based, but the Keezel device goes an extra step by acting as an intermediary Wi-Fi hotspot which passes all data through a VPN. You get to select the endpoint of your choice or use two devices to act as either end of a private tunnel. The advantage of this approach is that you skip all the setup and works with all Wi-Fi devices. There's a free basic service and a paid level that gives you access to many more VPN providers. You can also use it as a portable battery, and there are plans for a platform to enable remote access to file storage and home automation devices, amongst other things.

This Mumbai-based startup has clearly been inspired by one of the most beloved adventure stories ever written. The Frodo Action Camera aims to take the pain out of shooting, editing and sharing videos. The camera looks like a bulky watch but can also strap on to a helmet or anything else. The main innovation comes in software form - the companion app can automatically take hours' worth of footage and create a video that's ready to share without requiring too much time or effort. You can tweak the output, but the idea is to remove the user from the process so that footage can be shared quickly. 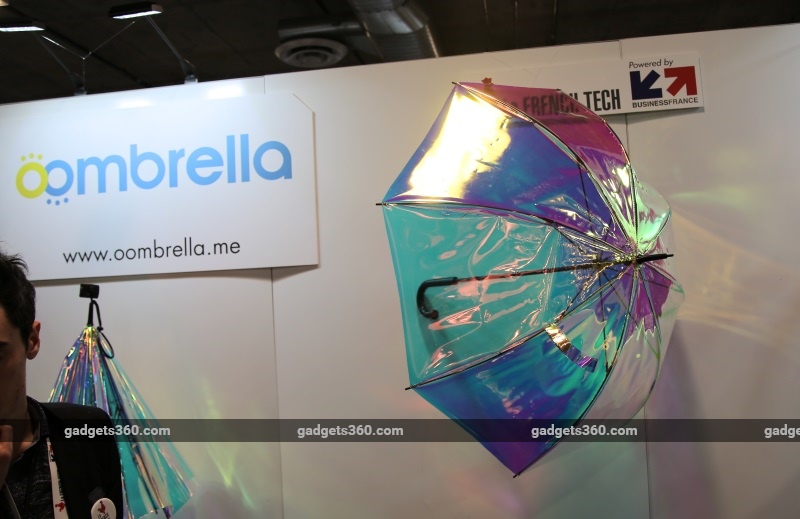 Another seemingly oddball project, the Oombrella showcases what technology can bring to your next rainy day experience. The Oombrella has a companion app that alerts you to weather conditions, and by pairing with the umbrella itself, you can receive alerts if you leave it behind somewhere and see its GPS coordinates in case it gets stolen. Weather alerts are generated by Oombrellas out in the wild, other app users, and by monitoring social media activity, so you might get very useful local information. Sure, it isn't solving any massive global problem, but tons of umbrellas are lost or stolen every year, and there's no shortage of luxury goods makers who might integrate this kind of functionality into future products.