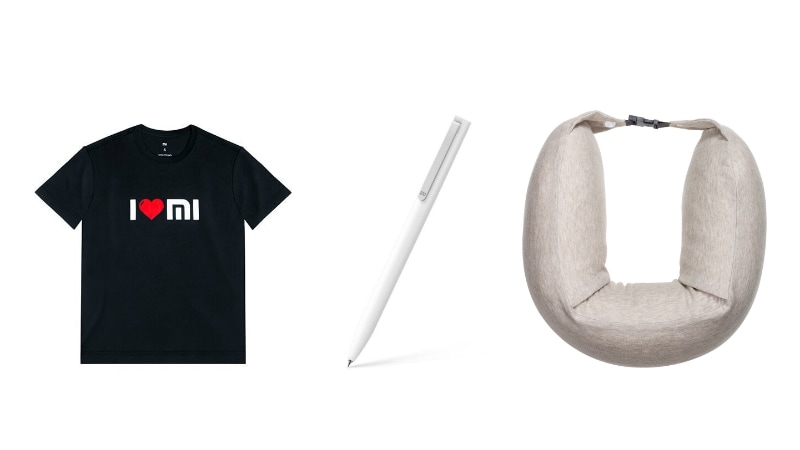 Within days of unveiling its latest selfie-focused smartphone, the Redmi Y2, Xiaomi on Thursday has announced the launch of four new products in India. However, none of these are related to the company's popular range of smartphones in any sense. The new products include the Mi Rollerball Pen, Mi Travel U-shaped Pillow, Mi I Love Mi T-shirt, and a charge cable for Mi Band 2 and Mi Band HRX. All these products became available via Mi.com starting 12am (midnight) on Friday, June 15. The price range for the products is between Rs. 129 and Rs. 999.

The Mi Rollerball Pen comes with an aluminium body and has been priced at Rs. 179. The Travel U-shaped pillow has been made with a combination of cotton and natural latex and bears a price tag of Rs. 999. The I Love Mi T-shirt has been made with a fabric blend, comes in Grey and Beige colours, and costs Rs. 399. Finally, the charge cable for the Mi Band 2 and Mi Band HRX can be bought for Rs. 129.

Xiaomi in China recently launched its latest Mi Rearview Mirror Driving Recorder with voice control capabilities. This is a smart rearview mirror that will assist drivers while they park their cars or during highway travel. It has been priced at CNY 399 (roughly Rs. 4,200) in China and is listed on Xiaomi's crowdfunding platform, Youpin, as well as the company's China site.

To recall, Xiaomi's Redmi Y2, which is a rebranded version of the Redmi S2, was launched in India earlier this month. The selfie-focused smartphone comes with features such as a 5.99-inch HD+ display with an 18:9 aspect ratio, a Snapdragon 625 SoC, up to 4GB of RAM, and Face Unlock capabilities. The 3GB RAM variant has been priced at Rs. 9,999, while the 4GB RAM version gets a price tag of Rs. 12,999.