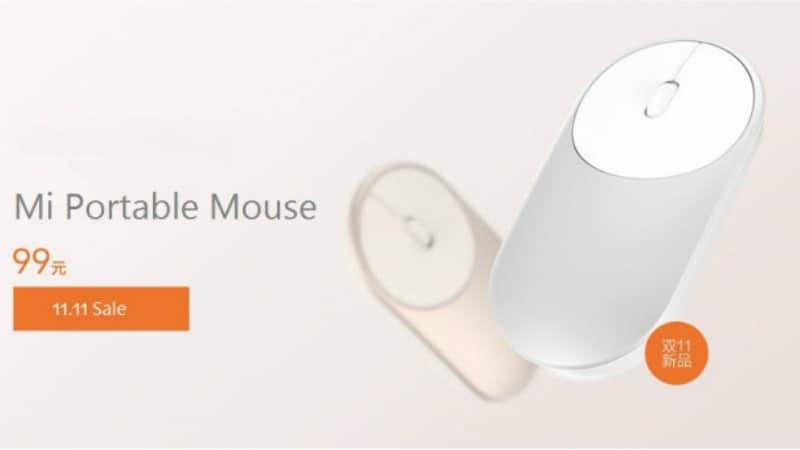 Alongside the anti-pollution mask, Xiaomi has also launched the lightweight Mi Portable Mouse in China. The mouse is 'inspired' by Apple's Magic Mouse 2 design, but it comes with an added functionality called 'dual-mode' that lets it support two devices simultaneously. The Mi Portable Mouse is also substantially cheaper than Apple's offering, and is priced at CNY 99 (roughly Rs. 1,000). It will be made available in China from November 11.

The wireless mouse connects to various devices via Bluetooth (version 4.0) and wireless adapter (radio frequency 2.4GHz), and weighs only 77.5 grams (including batteries). It is compatible with the Mi TV, tablets, mobile phones, laptops, desktops and other devices. The Mi Portable Mouse offers wireless coverage of up to 10 metres, and needs AAA batteries to keep the cursor going.

As mentioned, one of the big highlights of the mouse is that it supports two devices simultaneously - one with Bluetooth and the other with the wireless adapter. The dual-mode allows the Mi Portable Mouse to connect to two devices, and even makes switching between the two devices an easy task. There's a dedicated button at the bottom of the device exclusive for switching purposes, and a user can shift the mouse from one screen to another just by pressing the button. Furthermore, it comes with high-speed laser positioning which is claimed to offer accuracy of up to 95 percent and 1200dpi.

The mouse wears an anodised aluminium shell, and measures 10.2x57.2x23.6mm, the company notes in a forum post. Xiaomi notes that the Mi Portable Mouse is fully compatible with Windows 7 and above devices. Function keys, LEDs, positioning groove are all located at the bottom of the device.

As mentioned, Xiaomi has also launched an anti-pollution mask in China, on its crowdfunding programme. The anti-pollution mask come with a rechargeable air filter, and is priced at CNY 89 (roughly Rs. 900). There is no word on when both the devices will launch in India.

Orange Pi PC2 Is a $20 Quad-Core Computer for Android, Linux
Twitter Reportedly Considering Sale of Vine Instead of Discontinuation