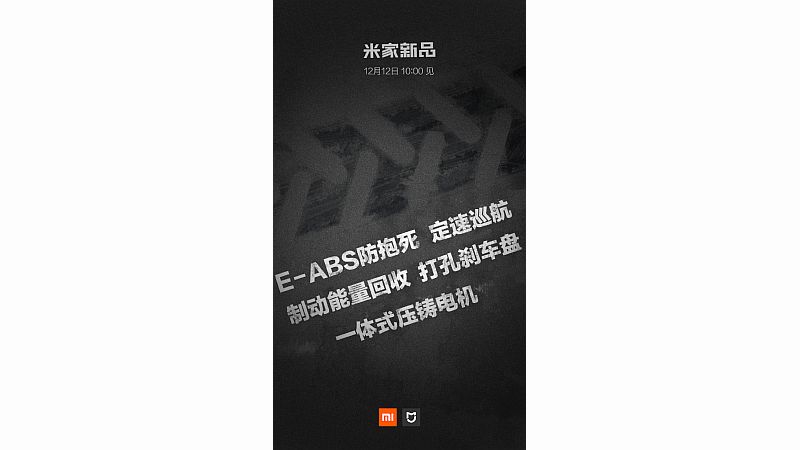 Xiaomi's sub-brand MIJIA has shared a teaser image suggesting that it will unveil a new electric bike (or a car) on Monday. Separately, the Chinese company launched the Yeelight LED Ceiling Light in China.

The teaser image shared on Weibo shows a tyre skid mark on the background suggesting it is some kind of vehicle. Since the company has launched an electric bike in the past, dubbed Qicycle Electric Folding Bike, it's possible the company is launching a new model. However, it may be an electric car as well. The shared teaser image also includes E-ABS short for electric anti-lock braking system, regenerative braking (seen mostly in electric cars), cruise control, and perforated disc brakes.

The Qicycle Electric Folding Bike, priced at CNY 2,999 (approximately Rs. 30,000), didn't include any of the features suggested in the teaser image. We can expect the company to bring an upgraded model of Qicycle Electric Bike. We will have to wait till Monday to see what Xiaomi has up its sleeves.

Xiaomi on Thursday also unveiled the new Yeelight LED Ceiling Light priced at CNY 349 (approximately Rs. 3,500). The Yeelight LED Ceiling Light can be pre-ordered through the company's Mi Smart Home crowdfunding platform. It is expected to start shipping from December 29. At the time of writing, Mi Smart Home crowdfunding platform had 3,820 backers while the company has a target set at 10,000.

The company claims that the Yeelight LED Ceiling Light takes merely 5-minutes of installation time, and uses a 240-colour rendering index of up to 95 Lumileds. The Yeelight LED Ceiling Light comes with a life expectancy up to 25,000 hours and is rated power is 28W. The biggest highlight of the new ceiling light from Xiaomi is it can be controlled via Android or iOS mobile app. It also comes with IP60 dust-proof design.

Cortana for Android and iOS Gets Revamped; Now Available in the UK
Vijay Mallya's Twitter Account Appears to Have Been Hacked by 'Legion'