With purchase of drone maker, Google sees a fleet of satellites 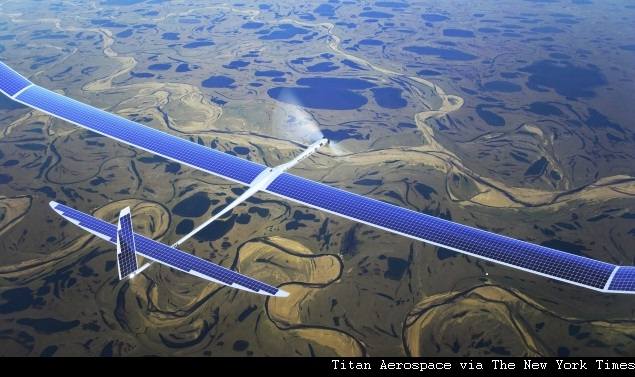 Google is reaching for the sky.

On Monday, the company said that it had purchased Titan Aerospace, a maker of high-altitude drone satellites, which Google says will be used to take photos of the Earth and to connect people to the Internet.

"Titan Aerospace and Google share a profound optimism about the potential for technology to improve the world," a Google spokesman said in a statement. Atmospheric satellites "could help bring Internet access to millions of people, and help solve other problems, including disaster relief and environmental damage like deforestation."

The news was first reported by The Wall Street Journal. Terms of the deal were not disclosed.

While Google's goals may sound lofty, Google may share them with a competitor. Facebook, which recently bought Ascenta, a British company that makes a similar type of drone. Earlier reports said that Facebook was in talks to buy Titan Aerospace.

The Titan Aerospace drones are notable because they are solar-powered and can fly for several years, according to the company's website.

Drones that can remain aloft for long periods of time could be used to constantly update of images of the Earth, which Google could put to use in its Maps platform.

Both Google and Facebook are also competing to deliver Internet access to people who live in places that are too difficult to reach with wires and other traditional means of accessing the Internet. While satellites can deliver Internet access to sparsely populated areas, the cost of using satellite data connections can be very high. Drones, in comparison, will be able to reach those customers at a much lower cost.