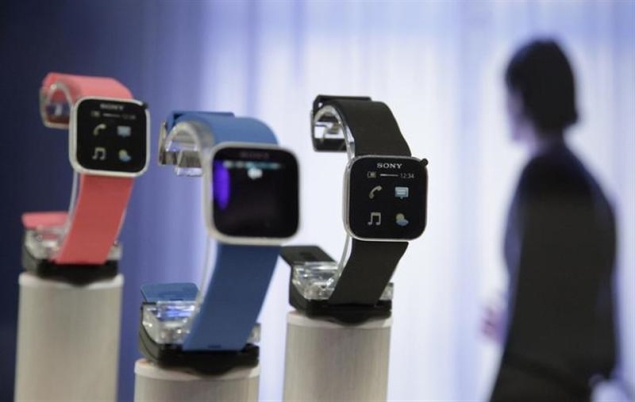 The notion of being fashionably smart is getting a makeover as Internet-linked computers get woven into formerly brainless attire such as glasses, bracelets and shoes.

A wearable computing trend is at the heart of the "quantified self" movement in which people track anything from how many calories they burn to how well they sleep or their moods at any given moment.

"We are heading for the wearable computing era," Gartner analyst Van Baker told AFP. "People are going to be walking around with personal area networks on their bodies and have multiple devices that talk to each other and the Web."

Understandably, the trend has found traction in fitness with devices such as the Jawbone UP, Nike's FuelBand, and Fitbit keeping tabs on whether people are leading active, healthy lifestyles.

The devices use sensors to detect micro movements and then feed information to smartphones or tablets, where applications tap into processing power to analyze data and provide feedback to users.

Jawbone recently added muscle to its lineup of fitness lifestyle devices with a deal to buy BodyMedia.

"There's an enormous appetite for personal data and self-discovery among consumers that will only continue to grow," said Jawbone chief executive and founder Hosain Rahman.

A Forrester Research survey conducted early this year found that six percent of US adults wore a gadget to track performance in a sport, while five percent used a gadget like UP or Fitbit to track daily activity or how well they sleep.

Worldwide shipments of wearable computing devices could climb as high as 30 million units this year, according to Forrester.

Interest goes beyond fitness to desire for things like a gadget that recommends films based on wearers' moods and one that replaces keys when it comes to unlocking cars or homes, the survey indicated.

"It is just amazing," said engineering professor Asim Smailagic, director of a wearable computer lab at Carnegie Mellon University in Pennsylvania. "We will see an exciting future ahead."

Smailagic began working on wearable computing at the university about 25 years ago, with projects including head worn displays that serve up technical information when needed during aircraft maintenance.

'Wearable computing has to be unobtrusive'
Sophisticated and inexpensive sensors for tracking movement, sound, GPS locations and more combined with "killer apps" in powerful smartphones have set the stage for wearable computing to be commonplace, according to the professor.

"Contextually aware computers will be hot topics for at least the next decade," Smailagic said. "They can help you when you need help, even to look smarter.

"Everybody likes to have the kind of help contextual computing can provide."

Contextual computing goes beyond recognizing where someone is to factoring in other information such as whether it's lunchtime or if someone has shown a preference for a nearby restaurant.

"When you combine wearable computing with sensors and machine learning algorithms then you get context, the computer knows your state and is able to help out clearly in the situation," Smailagic said.

He is confident Google Glass will be a hit despite privacy worries expressed about the yet-to-be-released Internet-linked eyewear with camera capabilities.

Google Glass connects to the Internet using Wi-Fi hot spots or, more typically, by being wirelessly tethered to mobile phones. Pictures or video are shared through the Google Plus social network.

"Wearable computing has to be unobtrusive, fit as a natural extension of your body, and not get in the way," Smailagic said. "Google Glass is on the right path to solve these problems."

The invention has been a hit with American tennis player Bethanie Mattek-Sands, who has been testing the special glasses as a training aid at this year's Wimbledon.

He predicted there will be "tons of companies playing" in the wearable computing sector but sidestepped a question as to whether Apple would be among them with the creation of a rumored "iWatch" device to be worn on the wrist.

"The wrist is interesting," Cook did allow.

The wearable computing craze has already spread to dogs, with startup Whistle introducing a pendant that tracks canines.

Whistle devices attached to dog collars or harnesses use movement-sensing accelerometers to track activity and even how well a pet is sleeping, then relay the information wirelessly to smartphones or wi-fi hotspots.

An online database built in collaboration with researchers and veterinary groups allows individual dog activity patterns to be scrutinized for hints that something may be amiss.

"Traditional technology companies will have to start paying attention to how sensors are enabling us to live," said Ben Arnold, director of industry analysis for consumer technology at NPD.

"Consumers are ultimately going to become more aware of their data in the digital ether," he said. "I suspect wearables are going to disrupt the way tech firms are doing business now."